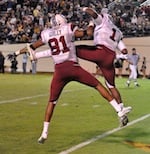 Tori Gurley in action at Vanderbilt. 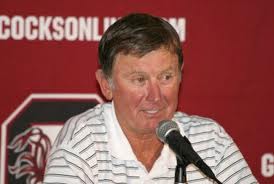 Head coach Steve Spurrier was happy to get an SEC road win.

The Gamecocks brought home another win this weekend, bouncing back from the loss to Kentucky. Saturday's win over Vanderbilt means the Gamecocks are still at the top of the Southeastern Conference's Eastern Division.

South Carolina got off to a slow start, trailing Vandy for much of the first half.  The Gamecocks did manage to finally score just before halftime going into the locker room tied 7-7.

Bryan Maddox scored in the third quarter giving the Gamecocks the lead for good and Alshon Jefery sealed the game with a final touchdown in the fourth quarter.

"We've not played second half well at all our road losses, and we actually won the second half tonight," Spurrier said after the game.  "So we need to try and continue that if we want the chance to have a big year."

Tori Gurley tied the second best mark in USC's school history with 13 receptions in the win. He finished with 109-yards and one touchdown in the 21-7 win over Vandy.

"It was a blessing," said Gurley. "I just tried to go out and play my part. I'm just happy we won."

Gurley says Quarterback Stephen Garcia also did a great job. He said the formations they ran, and the plays they called just happened to be the right ones.

"I just broke to the open spot of the end zone, and Stephen hit it," Gurley said. "The coaches just wanted us to finish. They said it was a long game – 60 minutes. We always do well in the first half, but in the second half kind of come out flat. We just tried to come up and make all the plays we could make to pull this game out."

Gurley said Saturday was his night, he just grabbed the opportunity by the horns and didn't let go.

USC maintained possession of first place in the division with the win in Nashville. With another win, the road to Atlanta for the SEC Championship is starting to look clearer.

This weekend the Gamecocks host Tennessee, followed by another home game against Arkansas on November 6. The next three games will determine the division winner.

Tennessee will be 0-4 as they travel to Williams-Brice Stadium this Saturday for the 12:20 p.m. kickoff.   A Gamecock victor will eliminate hapless Tennessee from contention for the division crown.