Titanium Necklaces are Popular for Athletes 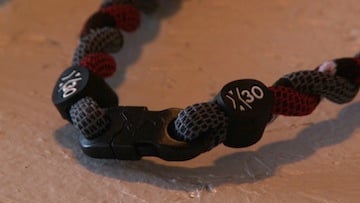 "Most athletes or professional, collegiate, and high school athletes it's common to see them wearing the Phiten necklace," says Matthews. "I think it's kind of a trend thing it's supposed to help circulate your blood and give you more energy and help you perform better."

The question is how can a fabric necklace make athletes perform better?

Gerg Albach says Phiten goes through a process called the Phild process that breaks titanium down to a molecular level and blends it into the rubber inside the necklace.

"Titanium is what some call the super metal, it actually works with your body chemistry and increases your blood circulation in those areas," Albach claims.

Albach says he did not buy into the necklaces when he first heard about them. He was told if he wore the necklace he wouldn't get headaches.

"I put the necklace on, and eight years later I still haven't gotten a headache," he said.

Matthews hasn't noticed a big difference in his baseball abilities, he says he wears it because it's what baseball players do.

"You wear it because it's a style," he says. "We all see the major leagues guys do it and we see all the college guys do it, and then all the high school guys do it. It's passed down from each level."

Matthews says metal or no metal, the key to his success is his everyday effort, not a piece of jewelry.

Albach's store, Sports Titanium is located on Assembly Street. They sell everything from the titanium necklaces to shirts and even socks.