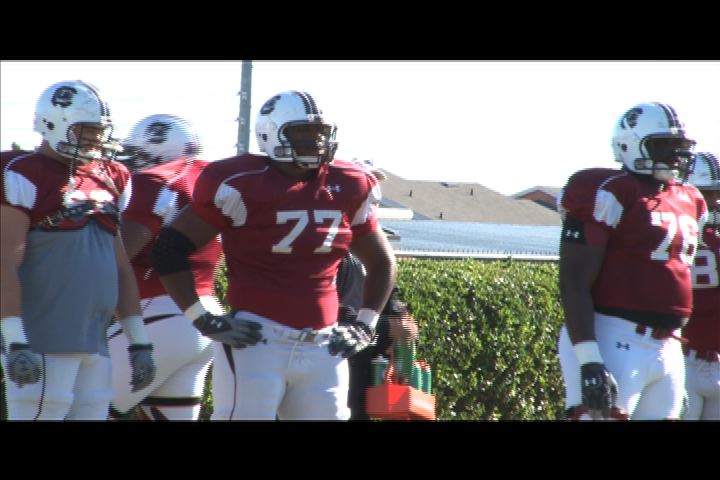 Most high school athletes don't get the chance to play at the next level.  But many who don't get scholarships to play in college and still want to perform have the opportunity to walk-on to a team.

Walk-ons typically get to practice, dress out, and sometimes travel with the team, but it is rare for a walk-on to receive a lot of playing time.

However for one USC football player, walking on was just not enough.

Garrett Chisolm started his college football career at Pikeville College in Kentucky.  Chisolm transferred to South Carolina in 2008 after one year.

Chisolm tried out for the Gamecocks in the fall of 2009 and he immediately impressed coaches.

"We gave him an opportunity and he went to the scout squad," head coach Steve Spurrier said.  "Pretty soon last year Coach Lorenzo Ward said ‘That walk-on kid Chisolm, you need to take him over to the real team.'"

Chisolm made his first start against Arkansas at left guard.

Not only has the 6'6", 300 pound lineman excelled on the field, he's also doing it in the classroom.  Chisolm was recently named as one of 47 semifinalists for the William V. Campbell Trophy.  To be nominated, the athlete must be a senior or graduate student and have a GPA of at least a 3.2 on a 4.0 scale.

Chisolm says he's privileged to be named a candidate.

"Hopefully I can win it and bring some honor back to USC and show everyone that we have some smart athletes at our University."

Chisolm's teammates think highly of how he carries himself.

"He inspires me in so many ways just on and off the field," offensive lineman Terrance Campbell said.  "He works hard and never complains about anything.  All he wants to do is get better."

The winner of the Campbell Trophy will be announced at the National Football Foundation and College Hall of Fame Dinner on December 7 in New York City.