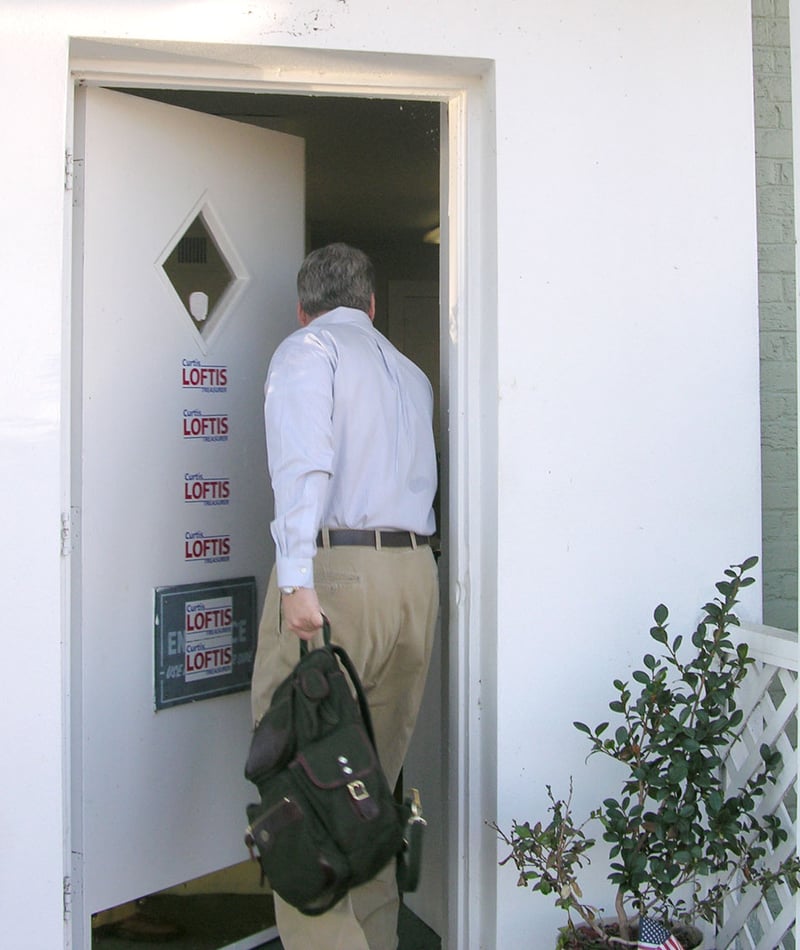 While candidates are launching their most vicious attacks in the run-up to Election Day, unopposed Republican treasurer candidate or, more accurately, treasurer elect Curtis Loftis – could kick back and relax.

Lofits, however, is hardly taking it easy before he enters office in January. Since defeating incumbent Republican Converse Chellis in the June primary, he has formed a transition team to investigate the treasurer's role and identify simple, immediate ways to save taxpayers money.

Loftis can already be measuring for the drapes and rugs because the Democrats have no one to run against him, and he has no third-party or write-in opposition. Carol Fowler, S.C. Democratic chairwoman, said no Democrats seemed particularly interested in running for the office.

"It's expensive to run for office, and unless you think you've got a good chance of winning, it's very difficult to spend the money," said Loftis, who spent $827,000 of his own money to win the primary.

Loftis touts his experience as a businessman who took over his father's business, Home Pest Control in Cayce, and expanded it from four employees to about 50. He said it would have been hard for a Democratic candidate to win in a largely Republican state and in a year when the nation seems to be trending conservative.

Republican or Democrat, however, not facing a challenger is fairly common in South Carolina. Among statewide offices, Republican Bob Livingston is also running unopposed for adjutant general. In the 124-member state House, 46 Republicans do not have Democratic opponents and 31 Democrats do not have Republican opponents.

But Loftis has been unusually energetic in preparing for office so long before inauguration, assembling a 24 member transition team of bankers, accountants, attorneys, entrepreneurs and other professionals from around the state.

"A lot of them were not my supporters," said Loftis, who during one of the state's nastiest primary races had his fair share of detractors about lacking professional financial experience. "But what I try to do is find people who have the broadest range of experience."

The nastiness still lingers when it comes to the transition.

Deputy Treasurer Scott Malyerck said that to his knowledge Loftis had not contacted the office, but that Chellis expected to hear from Loftis after Election Day.

"That is not true," Loftis responded. "At the highest level, people have approached Chellis, and we have been denied access."

Loftis has one transition team subcommittee studying his role on the five-member Budget and Control Board, which oversees the day-to-day operations of the state.

Another subcommittee is looking into the role of treasurer's office, which oversees the state's cash and investments, and his role as a member of the South Carolina Retirement System Investment Commission, which invests about $25 billion in assets for South Carolina's public work force.

A third subcommittee is focusing on his role as chairman of the State Board of Financial Institutions, which oversees state-chartered banks, savings banks, savings and loan associations, credit unions and trust companies.

Loftis says he's happy to start learning about the complex issues "because otherwise you start it when you're in the job, and I don't want to lose the first six months of my tenure learning stuff; I want to know most of it."

Loftis said he plans to decide what "the core functions of government" are as part of reviewing the state's taxes and expenses.

He expects big transformations in the Budget and Control Board and wants some of the board's administrative functions, such as maintenance of the state's buildings and vehicle fleets, transferred to the governor's office.

"What we've got now is a system where there's nobody ever in charge of something," he said. "If something goes wrong, everybody points at everybody."

For years, legislators have resisted giving the governor more power, but Loftis say he thinks they will approve creating an Office of Administration under the governor.

Loftis says he has considered that Democrat Vincent Sheheen could win the governor's race. But Sheheen was down 17 points to Republican Nikki Haley in the latest Rasmussen poll, so Loftis expects Haley and Richard Eckstrom, who is likely to be re elected comptroller general, to join him on the board, giving it an even more conservative swing. The two other members are state Senate Finance Chairman Hugh Leatherman, R-Florence, and House Ways and Means Chairman Daniel Cooper, R-Anderson.

Transition team chairman and former human resources consultant Bill Leidinger will assemble a final report for Loftis to use when he takes office.

"What's important? What can be accomplished? We want to have fewer, very good recommendations and establish Curtis to be successful," Leidinger said.

Loftis thinks the information will help in understanding what the treasurer's office is doing well and what it needs help with. Meanwhile, he's meeting with other state treasurers as well as county treasurers in South Carolina and looking for ideas.

Loftis says he wants to challenge other statewide elected officials to make the most of their roles.

"I'm going to do a better job of treasurer than anybody else has ever done," he said. "I want to work longer, and I want to work harder."

An admitted "transparency freak," Loftis says he will post his full schedule online, whether he is working all day or playing golf.

But golf looks to be unlikely, as the state is facing a billion dollar general fund deficit for fiscal year 2011 beginning June 30.

"The state has no money, we're broke, and that's a bad thing. But in a perverse way it works out well because this gives us a chance to make changes," he said.

"It's like when your house burns down, you don't want your house to burn down … but you do get to build a new house," he said.