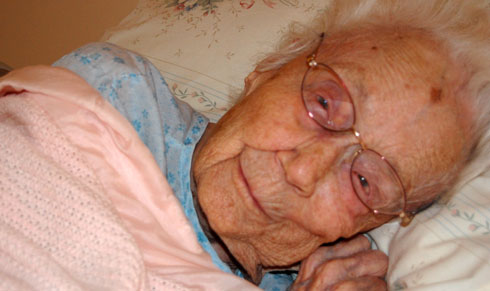 At a nursing home shaded by old gnarled oaks lives one of the last of the "Flapper Generation," Mary Wright Latimere Blue: a philanthropist, talented musician, and unofficial memory keeper for her small Georgia town.

The tiny woman with wispy cotton-white hair, her fingertips smoothed by time and almost 100 years of piano playing, seems almost swallowed by her hospital bed as she greets strangers and familiar faces the same way: "I'm so glad you came to see me."

"I can't believe I'm 105," Blue said in her room at the Washington Manor nursing home, about 60 miles west of Augusta. "I never thought I would live to be this old."

According to Guinness World Records, the world's oldest person is Eugenie Blanchard, 114, of St. Barts, France.

Blue was born in Washington, a town known for its well-preserved older homes, on Feb. 15, 1905, two years before Oklahoma became the 46th state.

Blue said she started piano lessons in 1913 when she was in third grade.

"Mother gave me and my sister Clifford a piano," she said. "I loved it so."

"They said I could play pretty good. I play by ear too," she said.

She brought her beloved piano with her when she moved into Washington Manor 13 years ago, but it has sat untouched for almost a year since Blue became confined to her bed.

Blue's friend of 25 years, Norma Alice Walker, 88, said she used to take Blue to the First Baptist Church in Washington where Blue played for the Sunday school class for the last time about a year ago.

"She played from memory because she's blind," Walker said.

Reba Hester, 89, has lived in the room next to Blue's for three years and says Blue used to play all the time. Hester says she misses hearing Blue play.

Blue said one of her favorites to play as a child was "Over There," a popular World War I song written by George Cohan in 1917. She said she was 12 when she learned to knit to help the soldiers. Blue said she and her friends knit washcloths for the troops out of thread the grocery store used to tie packages.

"I sometimes wonder if they ever used them," Blue said.

At Christmas, Blue said, she and her friends would go caroling, and people sometimes gave them money that the carolers donated to the troops.

After graduating from Washington-Wilkes High School in 1922, Blue said, she went with Clifford to Atlanta to take a yearlong business course, but she doesn't remember the name of the school.

From there she moved into a boarding house in Charlotte and landed her first job as a stenographer at the Veterans Bureau where she later became a secretary.

She met a banker, Roland Earle Blue, and they were married in 1931. He died five years later from tuberculosis, leaving her with no children.

"I asked her why she never remarried, and she said, ‘I never found anybody that interested me,'" said one of Blue's nephews, Milton Roberts Sr.

Blue said that after her husband's death, she moved to Augusta and worked at Lynwood Hospital as a secretary until she retired in 1962 at 57. She moved back to Washington and went back to work as a secretary for Washington Coca-Cola Bottling Co. until about 1970 when she was 65.

One of Blue's nieces, Mary Mellen, said her aunt never complained about the hardships in her life and "has never said anything ugly about anyone."

Mellen said the University of Georgia had asked Blue to donate her brain for Alzheimer's research because her mind was so clear at an advanced age.

"She didn't want to do it at first, but then she said, ‘If it can help somebody else, then I'll do it,'" Mellen said.

Blue no longer can get around without help and can't read or listen to music, things she said she misses.

"I've had a good long life, but sometimes think it's been too long," she said.

Blue has outlived two sisters and a brother and said she misses them most of all.

"When I say my prayers at night, I ask the Lord to let me just stay asleep," she said.