Second Half Woes Lead To Gamecock Loss to Kentucky 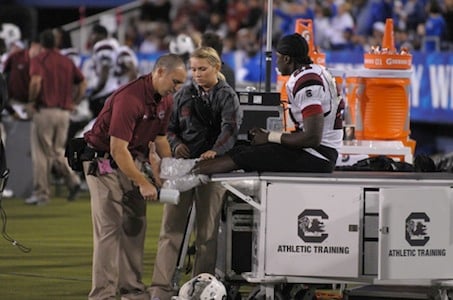 Lattimore sprained his ankle shortly after the second half started. 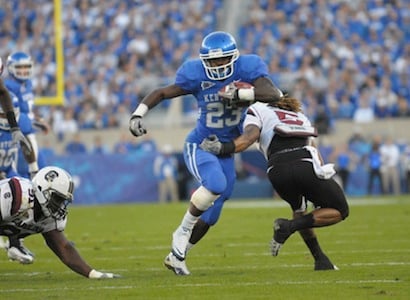 Stephon Gilmore misses a tackle as Kentucky scores 21 straight points in the second half.

South Carolina went into Kentucky Saturday night as the top team in the SEC East, fresh off an upset win over then-No. 1 Alabama.  USC was a prime target, many thought, for a let down after the Alabama game.

The game looked like anything but a let down in the first half though as the Gamecocks put up four touchdowns early going into the locker room with a 28-10 halftime lead.

The second half however, proved to be a totally different game when star running back Marcus Lattimore was forced to leave the game with an ankle injury.

"I just heard it crack and I thought something really bad had happened," Lattimore said, "But it's just a sprain."

The Gamecock's offense left the field with Lattimore, and the defense started struggling.  Kentucky  scored 21 unanswered points in the second half, taking the lead with 1:15 left in the game.

Carolina marched down the field to get within field goal range.  Instead, the Gamecocks tried one last pass to the end zone with 11 seconds left only to have it intercepted, ending a chance to throw the game into overtime.

"We just can't, as they say, put the nail in the coffin," said South Carolina head coach Steve Spurrier. "We can't put a team away.  We just can't do it."

"I wanted this one so bad," Hartline said. "It was just a big, emotional win for everybody."