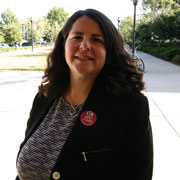 Michelle Leder, founder of footnoted.com, a website that blogs about the financial information public companies give to the government, spoke to Univesity of South Carolina students and staff Thursday as part of the journalism's school annual I-Comm Week

Blogging has provided more business opportunities for journalists, and Michelle Leder, who digs into the financial information public companies give to the government, is a good example.

Leder, a former newspaper business reporter and editor who was laid off, started her footnoted.com blog in 2003 with a post about Apple's plan to change the price of its stock options. This past February, the investment company Morningstar bought footnoted.com for an undisclosed price.

"All it takes is a good idea and some consistency," Leder told students and faculty Thursday during the University of South Carolina journalism school's annual I-Comm Week.

Leder said she was born with an entrepreneurial spirit, which led her to always ask how something can be done better. It's not something that always endeared her to her bosses, she said, but it's something she said many business journalists need to do more.

"It amazes me the lack of thinking outside of the box there is in the journalism industry," she said.

The journalism school is creating a business journalism program with the help of a $500,000 endowment from Ken Baldwin, a retired newspaper executive. Leder was the inaugural speaker in what the school hopes will be a regular lecture series as part of that program.

"It's wonderful that there are people like her who can do this sort of thing and make a living off it," Baldwin said.

Leder said her journalism background helped build footnoted.com, though she said it's equally important to have a strong business plan.

"You don't need to compromise your values, but you need to be thinking how to generate revenue," Leder said.

Leder generates revenue through advertisements, but said she is constantly thinking about new ways to make money.

Kathryn Kranjc, a first-year nursing major at USC who was in the audience, said she didn't know business journalists needed such a range of skills.

"It was interesting to hear about all the economic factors that you have to consider as a journalist," Kranjc said.

Leder said to operate a website you need someone who will provide the content, a coder, a designer and someone who focuses on the revenue. She considers herself a content person who isn't the best with technology.

"I know enough HTML to get me in trouble," Leder said.