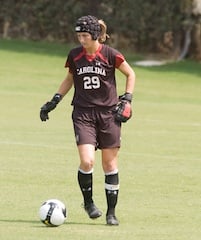 Mollie Patton wearing her headgear in a soccer practice.

Medical researchers and athletic coaches are taking a closer look at sports-related concussions especially among football players. But what about soccer?

Many parents recommend their children play soccer as a safe sport. But that's not necessarily true.

Mollie Patton learned that the hard way. She is a four-year starter for the University of South Carolina women's soccer team.  Her career, however, has taken its toll on her health.

"I have had six concussions, four minor and two major." Patton said.

Patton was out of action for six months after suffering her last concussion in 2007. She was not sure if she would ever return to the game she loved.   And, she says, the risk of her continuing to play was bigger than ever.

"There's always risks, but with me coming back after my concussion they had grown ten fold." Patton said.

"I already suffer from memory loss and I have some slight sensitivity to light and my ADD has just gotten worse over the years." Patton remarked.

Mollie now wears headgear when she plays. The gear, however, only protects Mollie from skull fractures, not concussions.

"The headgear soccer players wear most often is more of a padding than a true helmet, it reduces the amount of impact on them," said USC Athletic Trainer Scott Gardner.

Gardener says when an athlete suffers from one concussion they are more more susceptible to another one in the future.  When that happens, he says, the next could be worse. Its called "Second Impact Syndrome" and it only occurs in athletes under the age of 23 whose brains are still forming. It is a rare and a sometimes severe injury that happens when a brain is not quite healed from it first concussion and is jolted again.

That is exactly what happened to Mollie. She suffered a few minor concussion that she didn't think too much about them because she only became a little dizzy when it happened.

"But the next time I got hit I was very dizzy.  And my last one I think it was just full out, I was knocked out." Patton remembered.

Mollie was tending goal when she took a knee to the temple. She hit the floor, out cold, and her body went into convulsions.

"If someone is seizing on the field the severity of the concussion is much greater," said Scott Gardner.

Mollie simply says she escaped a close one. She feels lucky to be able to still play the sport she loves.

Doctor's don't know what the limit is on how many concussions one can sustain in a lifetime before short and long-term effects begin to take place. For all Mollie and her doctors know, one more concussion could be the one to take Patton out of the game, and possibly life.

That's a risk Mollie says she is willing to take.