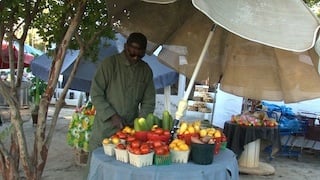 George Lewis working at his stand on the side of the road.

The city of Columbia is considering a ban on street vendors, businesses that set up on parking lots and street corners to sell everything from vegetables to shoes.  Vendors would be required to have a regular location, get a permit and abide by all other laws regulating businesses in the city.  There would be some exceptions to the law for seasonal vendors, but they would have to get a special, temporary permit.

George Lewis has been selling things from his stand on North Main Street for five years.  He sells everything from plums to peaches and even teddy bears.

The city's new law would ban George and others him from street corners and vacant lots.  He isn't sure what he is going to do.

"It's kind of not like a real good income.  You know it just keeps you from begging somebody for something," says Lewis.  "You make probably $30 or $40 a day or sometimes $50 a day.  Sometimes me lucky to make $60 a day.  Then you have to turn that back over so you know its not a real income.  You're just trying to survive."

Lewis says that his roadside stand is life.

"I'm in a bad situation and there's no shame to it.  Cause its reality and it must be known."

Business License Administrator, Brenda Kyzer, says although people like Lewis might not be doing anything wrong, they must put the same regulations on everyone.

"It just doesn't look real good.  It's not the type of atmosphere that the city is trying to attract," says Kyzer.

But Lewis says he won't give up.

"You know I'm not going to do nothing wrong.  I have a little baby boy, nine years old, I'm living for him.  I want to steer him and mold him in the right frame of mind so he can change the world," says Lewis.