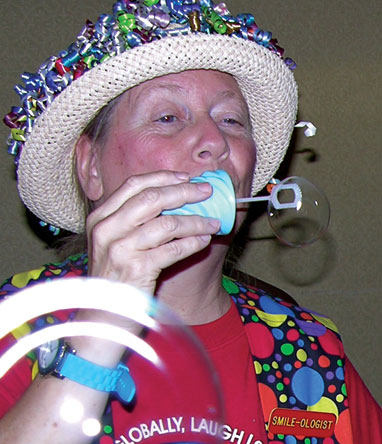 Laugh therapist Nancy Jones likes to blow bubbles at stop lights. "The other drivers absolutely love it," she says.

Dip your funny fry into your silly sauce for a good laugh. Better yet, says Columbia laugh therapist Nancy Jones, blow bubbles at stoplights, smile at strangers and fill your weekends with chocolate for happier living.

Jones already has done more workshops this year than all of last year and has a year of bookings. But her success is no laughing matter – it's a product of a recession that has stressed the mental health system and sent people looking for relief from depression, stress and anxiety.

Jones charges $100 an hour, plus expenses, for her laugh sessions, but she also hosts two free laugh clubs for all ages each month.

Debbie Thomas, who has gone to Jones' sessions, says they're the perfect antidote for the stresses of dealing with deadlines and not being able to leave work at the office.

"You can go in and be stressed out and be so tired," says Thomas, who owns Minuteman Press in Lexington. "You just come out feeling so weightless because it is a very, very fun time."

There's a lot less laughter at the South Carolina Mental Health Department emergency room, where people are waiting longer as more of them walk in, even as resources have been thinned by state and federal budget cuts, says nurse-manager Joyce Davis James.

Since most don't have severe, persistent mental illness, they have to be referred elsewhere, she says. But many have lost their jobs and insurance and don't know where else to go, Davis-James says.

"They're coming in because of anxiety, panic, or plain depression. They don't have a history of it, but it's because of their situation that they're having issues," she says.

Another indicator of the problems people face comes from the National Center for Health Statistics, which says antidepressants are the most prescribed drug for middle aged Americans.

It's about a sense of accomplishment, says Dr. Wendy Wang, a psychiatrist at the Dorn VA Medical Center in Columbia. "When you lose your job or get pay cuts, people tend to have a harder time with their self-esteem."

"But we never just encourage medication-management," says Wang, who uses laugh therapy in her practice. The best way to deal with stress, she says, is "to try to manage it."

Jones, who retired as a psychiatric nurse from the state Mental Health Department in 1996, says she wishes she'd had this training while working.

"It would have helped the patients – and the staff," said Jones, who also worked in the state prison system. "The staff is under a lot of pressure also."

Steve Wilson, Jones' trainer and the founder of the Ohio-based World Laughter Tour, says laughter is a "therapeutic ally." Having positive emotions can help any medical treatment do its job, he says, but negative ones, like stress and despair, can make them less effective.

Wilson, a psychologist who has studied therapeutic laughter for over 25 years, says laughter's effects have always fascinated him and led to creation of World Laughter Tour, which he says trains laugh therapists worldwide.

During her hourlong classes, Jones leads exercises, like milking an imaginary cow and laughing to make the milk creamy and rich, that stimulate constant laughter. As people laugh along, the giggles and guffaws usually become spontaneous.

Her free laugh club at the Cayce-West Columbia library meets the first Thursday of each month from 6 to 7 p.m. The other meets every third Monday at the Lexington Wingate Hotel at Interstate 20 and U.S. 378 from 7 to 8 p.m. and promotes the Harvest Hope Food Bank; participants are asked to bring a nonperishable food item.

Debbie Krauss of Columbia went to a laugh session on her way home from a long day at work managing security credentials at the Columbia Metropolitan Airport, where, she says, she deals with "lots of people that don't want to be there."

"I went into the meeting feeling tired, worn out and dejected," Krauss says. "My whole mood changed. I was happier and more like, ‘I can go home and do a load of dishes and some laundry – Yay!' "

"It sends a message to the brain that things may not be as bad as they feel inside," Wang says. "Laugh along, and you'll catch the spirit of it."

But laughter alone isn't enough, Wilson says. "You have to help heal and readjust attitudes that block joy and happiness."

Perspective is the biggest difference in whether someone is happy, Jones says.

"If you wait for your life to be perfect to be happy, it's never going to happen," she says. "Happiness isn't just going to come knocking at your door. You have to look for it."