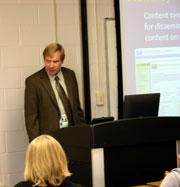 Glen Nowak takes a question from a USC student Tuesday during his lecture about the difficulties of communicating health and science news. Nowak, the director of media relations for the CDC, is one of the speakers for USC's I-Comm Week

Science jargon and language sensitivity have made it more difficult to communicate science and health news, with too many news releases filled with confusing terms, the chief spokesman for the Centers for Disease Control and Prevention said Tuesday.

Glen Nowak's task is to determine how to effectively communicate science and health news to the public. He says it's important to be able to write clearly and under deadline. Messages should be not only relevant and significant to the target audience, but also easy for everyone to understand, he said.

"Think about how it's going to be read by an eighth-grader," Nowak told students and faculty during the University of South Carolina journalism school's annual I-Comm Week.

Time is also an issue, he said.

"You don't want to take too long communicating information because then it'll look like you're hiding something," Nowak said.

He said dealing with fears of a flu pandemic caused by the H1N1 virus last year showed how language sensitivity can complicate things. The CDC first called it swine flu, and that became the popular term.

But members of the pork industry didn't want the word "swine" in it, so the agency eventually changed to H1N1, he said.

Nowak, who has worked for the CDC for 11 years, said he became interested in journalism because of his love for writing. "I've always appreciated the power and ability of writing," Nowak said.

Everything he talked about "were great examples of the situations I've faced before," said Foster, who edited a wildlife magazine, where she had to collaborate with biologists when communicating science news.

"I can tell my students everything he said, but they're going to hear it much better from him because he's such a well known expert," Sisk said.