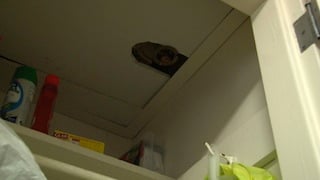 The women's quad dormitories on South Carolina's campus are the oldest dorms on campus, dating from the 1920's. USC has plans to renovate the dorms but Governor Mark Sanford's call for a halt to higher education construction threatened those plans.

The South Carolina Budget and Control Board unanimously voted Wednesday to halt all construction projects at all public, four-year universities that raised tuition seven percent or more prior to the new school year. USC's tuition went up 6.9 percent last year.

Women's quad residents are happy that USC's plans to renovate their dorms isn't going to be delayed. They say renovations are much needed, things are old and falling apart.

"We moved in and realized we had a condensation pipe crack, it just cracked," Kristen Bryan, a first year resident of Sims dormitory, said.

A start date for renovations on the women's quad has not been set.