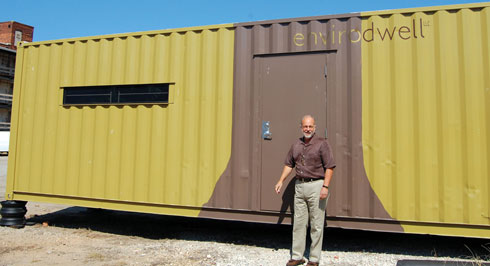 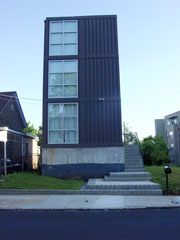 Glen Donaldson's three-bedroom, 1,920-square-foot Atlanta home was made out of six shipping containers and is the only container home in the city. (Courtesy of Glen Donaldson)

The containers normally run 8 feet wide and 20 to 40 feet long. For $40,000 to $50,000, Probst says you can squeeze a kitchen, bathroom, living room and bedroom into approximately 320 square feet. The container home is about $125 to $155 per square foot, which based on information from real estate agents and builders, is close to what you would pay for a stick-built home in Columbia.

"The days of the McMansions are over because of the sheer size of them," Probst says.

Probst, who has yet to sell his first Envirodwell, says that people are realizing that they don't need large homes, especially during a depressed economy.

The containers come into ports such as Charleston and Savannah Ga., and sold if an inspection turns up problems, he says. Probst says his two had been in circulation for years.

He stores the containers in the yard of Palmetto Compress Warehouse Co. between Devine and Blossom streets, bordering the USC campus.

While living in 320 square feet isn't common in Columbia, in large cities, like New York, it's not unusual for a loft. Europe has many small apartments. Swedish retailer IKEA displays several layouts of less than 1,000 square feet at many of its U.S. stores.

To fit everything in, Probst says he looked at the recreational vehicle industry for inspiration because it's good at using every inch of space and RV layouts are comparable.

Atlanta structural engineer George Runkle, who has designed several container homes, says some of his clients are in rural areas, such as an Idaho couple who have a container home that does not use outside utilities.

Runkle says his first container home, the only one in Atlanta, was built in 2006 for Glen Donaldson.

Donaldson, the home's builder, says his industrial-looking three-story home was built out of six containers, two on each floor, and took about six months to build. The inside walls were removed, giving the 1,920-square- foot home an open, spacious feel.

Donaldson says his home looks traditional on the inside except for the steel ceilings, which he did not cover to keep with the industrial feel.

Donaldson says the three- bedroom house is in a neighborhood with many vacant lots and older homes, about a mile from downtown.

"When I'm outside and people are walking by, they stop and ask me about it," he says.

Runkle says he hasn't run into problems with zoning, but, then again, he hasn't tried to put one in a cul-de-sac.

In the Columbia suburb of Lexington, ordinances probably wouldn't keep the container homes out, but neighborhood deed restrictions might, town building director Leah Youngblood says. She expects most people buying container homes would put them outside the town's limits.

Youngblood says building codes are the same across the state, so if a container home could pass in Lexington, it would probably be accepted in most cities.

West Columbia has an ordinance covering shipping containers as housing. A container can't be used as the primary structure, but can be used for something like the foundation, city planner Brian Carter says.

The ordinance says the container must be modified and can't look like a shipping container, and an engineer must certify the building as meeting code requirements.