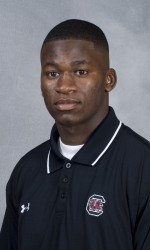 Many current and former Gamecock and Bronco teammates attended McKinley's funeral but others had to stay behind.

Senior fullback and Gamecock team captain Patrick DiMarco says he's still trying to deal with McKinley's death.  DiMarco says it was tough to handle initially, but after a couple of days the team was able to think of the situation in a positive light.

"Instead of maybe looking down upon it, let's look up on this... let's play for Kenny," said DiMarco.

He says McKinley was a great friend and great competitor. There is one thing he'll never forget about him.

The #19 Gamecocks will take on the #1 Alabama Crimson Tide at Williams Brice Stadium on Saturday, October 9th.