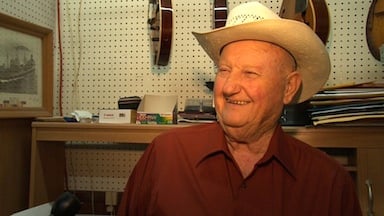 Bill Wells hopes to keep the bluegrass tradition going even when "he's on the other side."

Bluegrass music lovers now have a home every Friday night at an unusual location.  Bill Wells owns Bill's Music Shop and Pickin' Parlor, which, during the day, sells instruments, CDs, hats, or it's where you can learn how to build your own guitar.

But every Friday night the West Columbia music store hosts bluegrass open-mic night. The tradition started in 1986 as an occasional jam session.  It became so popular it's now a weekly event.

"Only a half a dozen (people) came out each week, now more than 150 people come to hear music," says Wells.

Bluegrass music lovers say the thing they love about Bill's is the family atmosphere.

"I think the thing about Bill's is that it's really and truly a family, people never throw anything at you," says Marty Lopez, a regular at Bill's open mic night.

If you are interested in attending, Bill's Music Shop and Pickin Parlor is located at 710 Meeting Street in West Columbia. The Friday open mic nights start at 7:30 p.m.