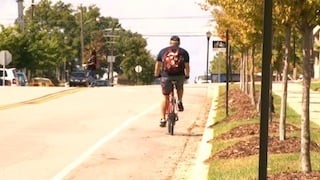 Bike Lanes like this one will be more common in Richland County with the Penny Tax.

Richland County is proposing a one cent sales tax increase that will pay for  a 25-year long series of transportation projects.  The increase would raise sales taxes from 7 percent to 8 percent.

County officials say it needs more than $1 billion dollars to meet its increasing transportation needs.  Most of the money will go toward road repair or expansion and mass transit. A small amount would go towards creating more bike and pedestrian walkways.

Ike McLeese, the CEO and President of the Columbia Chamber of Commerce, says the projects will create jobs in the community in a very tough economy.

"Its in the best interest of Richland County citizens to vote for the bill because almost every dollar will be paid for by people who do not live in the county," says McLeese.

Some people are not convinced.  Michael Letts is the founder and president of the group Citizens Against Tax Increases.  He says the bill would be more plausible if the economy was stronger.

"It is just out of character to try and ask people to pay more taxes when we have a recession going on and it will hurt our ability to recover, Letts says.

Richland County voters will decide in the November 2 elections whether sales tax will be increased.