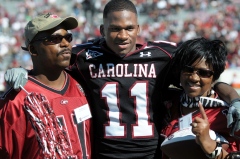 Kenny McKinley with his Parents in 2008.

McKinley was drafted to the Denver Broncos in 2009. He was found dead in his home in Arapahoe County, Colorado September 20. Police believe his death was a suicide.

"I think it's important that regardless of what was going on in his personal life, we still honor him as the man he was." "He was a father, a student, a son, a friend, and obviously a fantastic football player," said Student Senate President Matt Ungar.

His name will still be displayed in Williams Brice Stadium on the North and East ramps with other past football greats. McKinley is South Carolina's leader in receiving yards (2,781) and receptions (207). He finished his career with 19 touchdowns.

Gamecock players will wear a sticker with McKinley's number 11 on their helmets for the rest of the season in his memory.