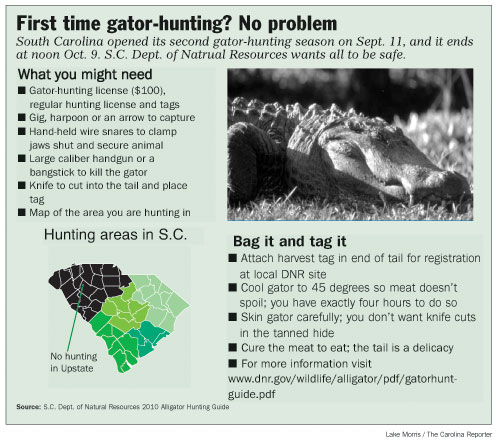 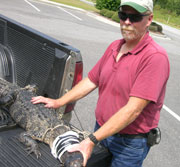 Ron Russell, a state gator agent, shows an alligator he retrieved out of a neighborhood pond in West Ashley. Russell was called to get the gator after children were seen feeding it.

Ron Russell restrains and blinds a 6-foot gator he caught in a pond that morning. He says gators are less likely to move when they can't see, making them less dangerous after the reptiles have been captured.

Armed with a slip snare, fishing rod and catchpole, Ron Russell gets into his gray pickup truck and heads off to work. Two gators in a pond near a Goose Creek apartment are starting to come too close to the residents, and Russell has been called to remove them.

Russell finds just one gator – the other one has moved to another pond. So he tests the seven-footer by seeing how close it will let him get without moving. The answer: five feet and that's bad news for the reptile.

State law lets Russell decide when a gator is a threat to residents and must be killed, and getting to within five feet without a flinch from the gator seals its death warrant.

Standing on the bank of the pond, Russell catches the gator with his rod and hooked line and reels it to shore. Face to face with the gator, Russell carefully puts a slip snare around its neck and then uses the catchpole to hold the gator in place so he can wrap duct tape around its mouth.

With the gator secured, Russell loads it on the back of his truck and takes it back to Moncks Corner to be killed and processed later.

It's just another day for the 51-year-old owner of Gator Getter Consultants, a family-run business that traps and removes unwanted alligators around South Carolina.

Russell is one of the state's few pros catching gators, but this month a lot of amateurs are traipsing about the state's marshes and ponds too. South Carolina's annual gator season began Sept. 11 and runs through Oct. 9, with each licensed hunter allowed to kill one alligator.

Russell says that growing up in Michigan he was always interested in animals, but reptiles fascinated him the most.

"I played with dinosaurs as a kid and I'm still playing with them today."

He admires how long reptiles have survived on Earth – for alligators it's about 60 millions years – and says that drove him to study them.

Russell says he was a security agent for hardware and drug stores in Michigan when he moved to South Carolina in 1979 to escape the cold. He became an assistant manager at Medway Plantation in Goose Creek, where he worked for 21 years before starting Gator Getters Consultants in 2000.

You might expect Crocodile Dundee, but when you meet Russell you get a guy wearing sandals and a polo shirt tucked into his jeans. He says he wears sandals because boots would get ruined in the water.

Russell likens alligators to puppy dogs. He's discovered they're dangerous only when disturbed, and that makes killing them difficult for him sometimes.

"Some of them don't deserve to be killed, but they're in a situation where they need to be removed," he says.

Russell likes to keep a professional appearance, so he keeps an extra polo in his truck for when he becomes too sweaty. That neatness can't hide that his job is dangerous, and that doesn't always make it easy for his wife, Sherry.

"It's a lot of sleepless nights," she says. "You always have that fear that something might happen."

She knows her husband won't take too many chances, but he has been bitten over the years. A gator's teeth marks remain on the index finger of his right hand, which has been bitten twice. The marks cover his knuckle, which needed to be popped back into place after one gator bite.

Russell's 16-year-old son, Cody, helps with the business, and he says it gives him lots of stories to tell at school.

"People think it's crazy having a dad who catches gators," he says.

Cody likes to tell about how he and his 19-year-old brother, Ronnie, went with their dad to corral a gator that had attacked a dog at a Pinopolis lake in 2005. At nearly 13½ feet, the gator was a state record at the time.

Russell typically works from 9 a.m. to 5 p.m., and says he will catch about 10 gators a week. He likes to work only during the week, but as one of only four state alligator control agents, he is called any time an alligator threatens the public.

In South Carolina's Lowcountry, it's not unusual for subdivision homeowners associations to have a contract with him to get rid of any alligator that crawls into the neighborhood.

"He's devoted most of his life to alligators, and that really helps him teach everyone else about them," Crawford says.

Russell also holds seminars each year to teach future gator hunters about the sport. The state first began licensing gator hunters in 2008. This year 3,800 people applied for a license, and 1,200 were chosen in a lottery.