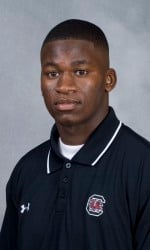 Former South Carolina star wide receiver Kenny McKinley was found dead in his home near Denver Colorado Monday evening. Police say it was an apparent suicide.  McKinley was drafted by the Denver Broncos but saw only limited playing time last year because of injuries.  He had been placed on the injured list this year by the team.

The reaction to McKinley's death on USC's campus and Columbia is one of shock, especially among those who knew him well.  Jasper Brinkley and Captain Munnerlyn, McKinney's team-mates who are both now in the NFL, say it still doesn't make sense.

"It was hard to believe," Brinkley said. "I don't know the situation he was going through. He's a brother to me. I love him."

"I was just so hurt when I heard about it last night," said Munnerlyn.

Brinkley and Munnerlyn say they want to pass on a uncomplicated message to the present Gamecock football players:  Play in honor of Kenny.

"You never know when it's going to be your calling," Brinkley said. "Just leave it all on the field, because that's the way he did it."

"Don't give up a play; never quit in honor of Kenny. Because you never know when it's your last day," Munnerlyn echoed.

The Denver Broncos football team is leaving up McKinley's locker in his honor for the remainder of the season.