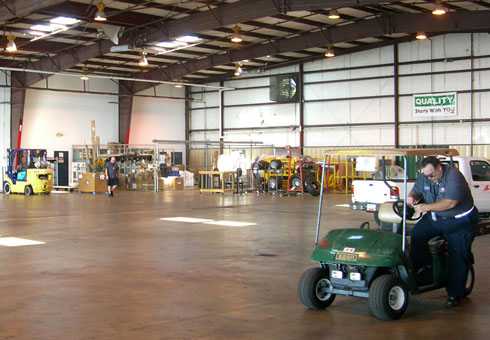 Atlantic Southeast's new hangar, normally a hive of activity at night, is nearly empty during the day as toolboxes wait for their owners to arrive.

The company that flies and maintains the small jets connecting Columbia with Atlanta, Chicago and Washington has expanded its maintenance operations and added almost 80 jobs at the Columbia Metropolitan Airport.

Atlantic Southeast Airlines, which formally announced the expansion Tuesday, can now perform all needed maintenance on six 50-passenger Canadair RJ 200 jets each night at Columbia Metro, making it the airline's second-largest maintenance base behind its home in Atlanta.

In the past year, Atlantic Southeast has gone from eight employees performing limited maintenance to 85 working at a full maintenance, overnight base.

The operation has recently moved in to the Doolittle hangar, named after the famed World War II fliers who trained in Columbia for the bombing raids on Japan. At 38,000 square feet, it's large enough to handle the expansion of the airline's maintenance operation.

Atlantic Southeast had been using a smaller, temporary facility and the maintenance tasks it was able to perform were limited.

"Now that we're here, we can do everything to the aircraft," said Bill Wolf, base maintenance manager.

The airline has been operating at the Doolittle hangar since Aug. 4, but held an opening ceremony on Tuesday night.

"The hearts beat out here at nighttime," Wolf said.

The airplanes don't start coming in for service until around 9 p.m., and the first must be ready to leave at 5:40 a.m.