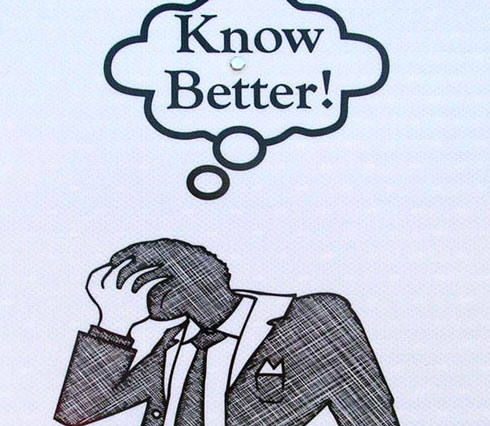 'Victim Man' has a message: Know better and avoid being a crime victim 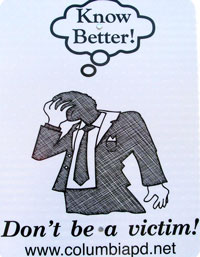 These signs are being posted in Columbia's public parking lots and some of its neighborhoods.

'Victim Man' with a message: Don't be a crime victim, too

Meet Columbia's "Victim Man." His car was just broken into, and his laptop was stolen from the back seat.

To make things worse, his face, buried in his hand, is plastered on signs in public parking lots and soon to be in some of Columbia's neighborhoods.

Victim Man is actually part of the Columbia Police Department's "Know Better" campaign to get people to take common sense precautions so their cars are not obvious targets for break-ins.

The department, which unveiled the signs Monday in Five Points, says Victim Man should have known better than to leave his valuables in plain sight – and you should know better, too.

Part of the Know Better initiative aims to prevent crimes of opportunity, in which thieves break into cars they see with valuables sitting in plain sight. The goal of the year old campaign is to halve auto break-ins and auto theft crimes in four years.

The department was looking for "a catchier phrase that can always be a constant reminder," Sgt. Ron Felder said.

Don't leave valuables in plain sight in your car, and stick to areas where there are people and avoid dark areas, he said.

Bergan Fudger, manager of the Mary store in Five Points, has found her car broken into twice. She likes the Know Better concept, which she said police introduced during an ice cream social in her neighborhood in July.

"It's simple and it makes people think," she said.

Thieves ripped the satellite radio out of her dashboard while her car was parked in Five Points in May 2008. In November, in her Forest Hills neighborhood, a thief rummaged through her center console and glove box and stole her GPS.

Fudger has some additional advice: If you have a GPS holder on your dashboard, hide that too, and conceal power cords.

Knowing better goes beyond keeping your valuables safe. It can help you be safe in any situation, Felder said.

"If you see something that makes the hair on the back of your neck stand up, it's probably not a safe place for you to be," he said.