Aflac to add as many as 100 jobs in Columbia 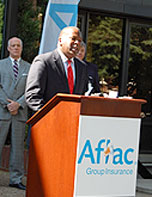 Aflac projects up to 100 new jobs in Columbia

Aflac, the insurance company known for its shouting-duck ads, said Monday it will bring as many as 100 jobs to Columbia and move into additional office space in the AT&T complex downtown.

Aflac expects to hire 75 to 100 people in Columbia next year and as many as 240 in five years, Goodall said. The new positions will range from entry-level to senior management, said Chuck Shields, Continental American's chief operating officer. He would not say what they would pay.

Gov. Mark Sanford, who attended the news conference, said the expansion shows how business conditions are improving in South Carolina, where the July unemployment rate was 10.8 percent.

Columbia Mayor Steve Benjamin, who took office June 30, said the announcement was "a great sign that our economic development plans are on the right track" and that Columbia is attractive to businesses.

Continental American will keep its headquarters on Devine Street, east of the USC campus, Goodall said. At the same time, Aflac will lease 27,000 square feet of space previously used by AT&T – the entire top floor of a five-story office building, one of two in the complex.

An additional half-floor will be available Dec. 1, said John Baker whose company, Baker and Baker Real Estate Developers, manages the building. He would not say whether it was AT&T or another company vacating the space.