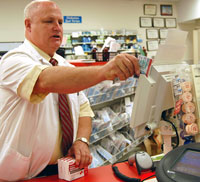 CVS pharmacist, David Andersen, says he can use a credit card machine to enter information into the chain's database designed to track purchases of medication that can be turned into methamphetmine. 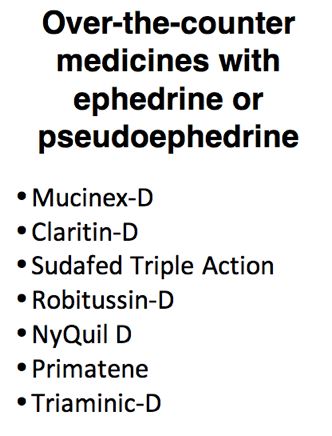 The next time you buy that box of decongestant tablets containing ephedrine, a state senator wants to make sure pharmacies around South Carolina quickly know about it so they don't sell you more of the key ingredient used to make methamphetamine.

It's the latest attempt to try to stop the scourge of the easily made stimulant that has helped turn Lexington County into one of the drug's manufacturing centers.

Standing on his mobile home's porch, Scott Holmes can almost see the house at 4157 Fish Hatchery Road in Gaston where Lexington County deputies busted a meth lab March 28. It was the 10th lab raided this year in the county; 26 were raided last year.

"It just seems so easy, that everything they need is so easy to obtain," Holmes said.

Ephedrine, an ingredient in many over-the-counter decongestants, is among the household products — including ammonia, paint thinner and match heads — that can be used to make meth.

State law says retailers cannot sell more than three packages of ephedrine-based products or 9 grams of ephedrine at a time. Stores must keep ephedrine behind the counter and record all customers' names and addresses.

But Sen. Michael Fair, R-Greenville, says that's not stopping the meth makers. Since stores do not share their ephedrine logs, ingredient gatherers — "smurfs" in street parlance — can go store to store and buy enough ephedrine to make a batch.

Fair's bill, which has languished in the House Criminal Laws subcommittee since passing the Senate March 11, would require stores to make their ephedrine logs part of a statewide online database run by the State Law Enforcement Division unless they lacked computers or Internet connections. A committee aide said the bill has not been considered because of two canceled subcommittee meetings and a backlog of other bills.

Fair said a drug company had already offered to pay for database software from Kentucky-based company Appriss, and the State Budget Office predicts no tax dollars would need to be spent.

A computerized log could be a time saver, he said. "It's probably easier to key in than write in," Fair said.

Jim Acquisto, director of government affairs at Appriss, said eight states including Alabama and Missouri had already passed similar bills and are using his company's software.

Local pharmacist Davis Hook, who works at Hawthorne Pharmacy on Sunset Boulevard, says he's concerned the real-time log would update slowly on computers at his store.

But David Andersen, a pharmacist at a CVS in Irmo, says he uses a credit card swiper to get data from buyers' driver's licenses that uploads almost instantly.

"It takes about 10 seconds," Andersen said. "This is by far the best system."

CVS pharmacies already have a national ephedrine database. Andersen said he sees one or two people per month trying to buy more than the legal limit.

Fair's bill also would lower the daily ephedrine purchase cap to 3.6 grams, or about one package of decongestant, and set a monthly cap of 9 grams. It would set the same limits for pseudoephedrine and phenylpropanolamine, also used in decongestants.

The U.S. Drug Enforcement Administration website says South Carolina meth lab busts peaked in 2005at 170 and dropped to 46 in 2008. Still, the number of meth-related hospital admissions continued rising from 126 in 2000 to 1,066 in 2007, according to a 2008 report by the University of South Carolina Department of Criminology and Criminal Justice. Meth can cause addiction, decreased appetite, and rapid heart rate, and its production leaves buildings vulnerable to fire and explosion.

"We have areas where it's relatively easy to produce meth, but we're also located near areas where you have a market for people to sell to it," Allard said.

The labs tend to be in rural parts of Gaston, Swansea, Pelion, and Gilbert, where, he said, low population density means little risk of neighbors smelling the chemical odor from meth production.

Community tips have led investigators to many labs, including the one on Fish Hatchery Road, Allard said. Still, for every neighbor who calls, many don't.

Holmes said he knew meth was a problem in his area near Gaston but did not know it was being produced just a few houses down. More than 10 neighbors said the same thing.

Stacy Brown, who lives in Swansea and runs a roadside gardening stand on Fish Hatchery Road, echoed a common sentiment: People keep to themselves in Lexington County.

"We have neighbors, but we don't usually have conversations with them," Brown said. "The way Lexington County is, the way it's very rural, things can be going on in your backyard and you don't even know it."

Allard said a statewide database like the one Fair proposes would help but that meth producers would still find ways to get the ingredients.

"It's not unusual for us to arrest people who have already been charged with manufacturing meth and arrest them for a second or third time while they're awaiting trail on the initial charges," Allard said.