Body Rites Tattoo employee Shannon Pervis works on a drawing of a tattoo that she will soon put on a customer. Pervis says good tattooing is a work of art and it is not immoral. 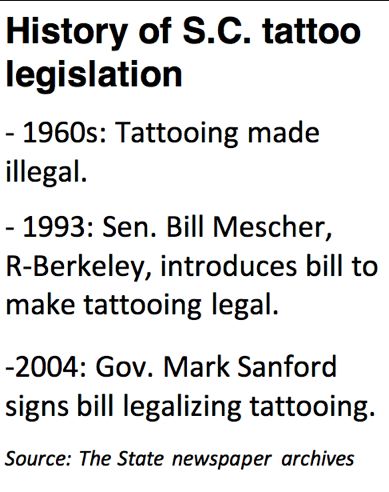 Brad Boultinghouse says he's spent hundreds of dollars getting tattoos in Georgia, money the 20-year-old said he would have spent in South Carolina had this state allowed tattoos at 18 instead of 21.

"If I am old enough to vote and be drafted, I should be able to make my own decisions about my body," Boultinghouse said.

Now, he can spend that money here. The age to get a legal tattoo in South Carolina dropped to 18 on March 30, when Gov. Mark Sanford signed a bill making the change.

Boultinghouse said tattoos are an outward expression of who he is. The image of a pocket watch on his right foot is particularly personal – the tattoo is of the watch his father gave him.

"It's frustrating because I have spent so much extra money," Boultinghouse said. "I think the economy in this state would benefit if people like me stayed here to get tattooed."

Tattoos were banned by South Carolina in the 1960s, and it wasn't until 2004 that the ban was lifted – but only without restrictions for those 21 and older. Until Sanford signed the new law, South Carolina was the only state requiring parental consent for 18-, 19- and 20-year-olds to get a tattoo.

Gino Cruz, manager of Magnetizm Tattoo in Columbia, expected a big jump in his business with the change.

The old law hurt business "so much more because we are a college town," Cruz said. "The people that want tattoos are the college kids that don't have their parents available to sign for them."

Franklin McKenzie, manager of Body Rites Tattoo in Five Points, said he turned away on average one or two underage customers a day. He said that with slightly more than 20 customers a week "one or two more customers a day could obviously be huge for us."

He expects to have to hire one or two more tattoo artists.

The bill had some powerful backers: Senate Pro Tem Glenn McConnell, R- Charleston, and Sen. Robert Ford, a Charleston Democrat running for governor, were the co-sponsors.

The bill, which had passed the Senate last year, passed the House 64-37 in mid‑February. Rep. Alan Clemmons, R-Horry, was one of those voting against it.

"I believe that government should not get in the way of businesses doing business," said Clemmons, who supported the move in 2004 to lift the overall ban on tattoos. "But I had to ask myself, ‘How would I feel if my 18-year-old daughter came home with a tattoo and nobody asked me about it first?' "

Rep. Keith Kelly, R-Spartanburg, said he voted for the bill because 18-year-olds can serve in the military and die for their country, so why shouldn't they be able to get a tattoo?

"If we don't think that way, then let's raise the emancipation age to 21 years old," he said.