Water permits could be life raft for S.C. businesses - DatelineCarolina

Water permits could be life raft for S.C. businesses during drought 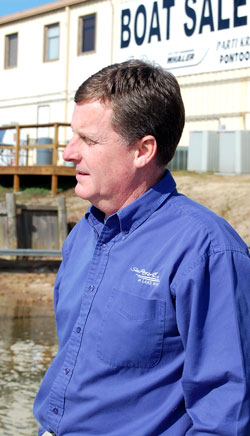 Lake Wylie Marina owner Jeff Hall looks to a new bill that will monitor water withdrawal on the Catawba River. Hall's marina has suffered over the last several years as drought, evaporation and large companies have lowered lake levels. 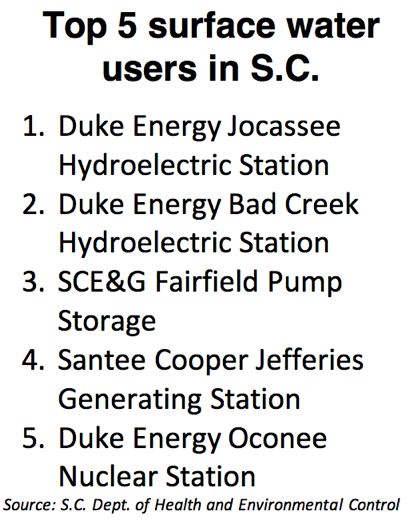 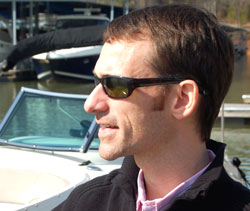 Water permits could be life raft for S.C. businesses during drought

Now, he's looking to legislation being considered in South Carolina that could protect businesses like his by regulating those upstream withdrawals.

The bill has passed the S.C. Senate and is now in the House Agriculture Committee. Previous attempts to pass such a measure have run aground when conservationists and those using water couldn't agree.

Differences remain this time, too, and one paper industry lobbyist does not expect the bill, which has had two subcommittee hearings, to pass. But Agriculture Committee Chairman Jeff Duncan, R-Laurens, thinks it will.

"I don't anticipate any major hang-ups. We are getting input from the public, and I think that it will only take a few more tweaks and changes for it to pass," Duncan said.

2007 was a bad year for Lake Wylie. The water level was down 7 feet, the lowest ever recorded since the lake was built in 1904. Only one boat access area out of nine remained open, water quality deteriorated and marina businesses like Hall's were in trouble.

"With the ramps closed, people couldn't go out on the lake. It affected my business dramatically," Hall said. "Boat sales were down. Boat services were down. There was such a loss to evaporation."

The Catawba River fills Lake Wylie, and riverkeeper David Merryman said lack of rainfall and evaporation were only part of the problem.

"There are massive water withdrawals upstream from Lake Wylie. We're talking a couple of trillion gallons of water being removed by some utility plants" every year, Merryman said.

While several put back up to 97 percent of the water they take out, Merryman said 3 percent of 1 trillion gallons of water can make a difference in a drought.

"Most of the larger water withdrawals are coming from reservoirs like Lake Norman that the Catawba River flows into, but during drought, the reservoirs hurt too, and that affects the river," Mead said.

But under the legislation in the House, anyone using more than 3 million gallons a month of surface water – generally water from rivers or lakes – would need a Department of Environmental Health and Control permit.

The bill would "grandfather" in companies already using surface water. Conservationists, like Merryman, say this is one of the details they are working to change.

The legislation would affect other rivers besides the Catawba,

For instance, International Paper in Georgetown County withdrew over 10 billion gallons from the Pee Dee River last year and would be grandfathered into the permitting system. But its lobbyist, Lynn Stokes‑Murray, doesn't think the bill will pass.

"There are still just too many unresolved issues for it to get through this year," Stokes-Murray said.

South Carolina, North Carolina and Alabama are the only states east of the Mississippi River that don't have a water management plan. If South Carolina's bill isn't passed by the time the Legislature adjourns its two-year session in June, it would have to be reintroduced next year.

A bill similar to the House's already has cleared the S.C. Senate's Agriculture Committee and is waiting for approval in the full Senate. State Sen. Phil Leventis, D‑Sumter, and a committee member, expects the bill is to pass.

"With a permitting system, we can sign in and monitor our water usage," he said. "This allows us to protect and plan for future periods of less rainfall. It's a non-rainy day fund."

Passing the law would help South Carolina in any future water dispute by showing "that South Carolina is ready and willing to manage their water resources," Merryman said.

"Hopefully, it will inspire North Carolina to do some similar legislation," he said

But for now, Hall said, "Every time it rains, I'm thankful and will be for the rest of my life. I'll never complain about rain again."