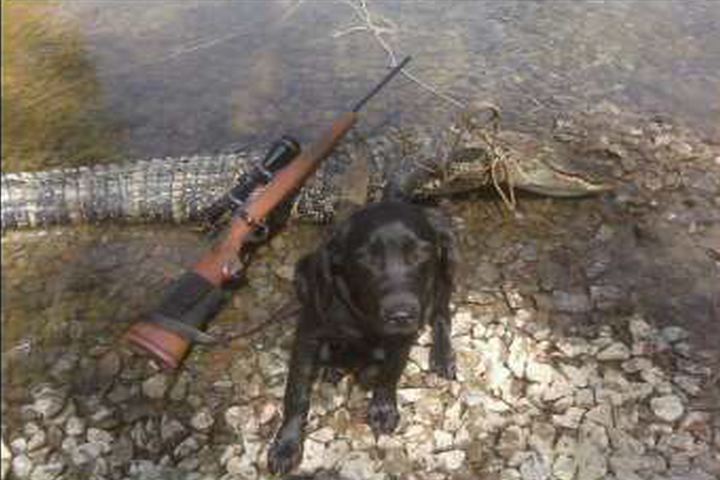 Ellie with the alligator in northwest Richland County.

It spring time in South Carolina and people are heading to the water for fun and relaxation, but some of them might be shocked at what they find.

Danny Buckner was clearing land in northwest Richland County with his dog Ellie at his side. He says he noticed Ellie had disappeared, then he says he heard noises coming from the nearby creek bed.

"She was with what I thought was a beaver or something and they were rustling around. I looked closer and then all of a sudden I saw it was a gator," said Buckner.

Danny says his adrenaline kicked into high gear and he jumped into the creek.

"I grabbed Ellie and I threw her out of the creek then hopped out. Luckily I always carry a firearm with me, and basically I just took care of the gator right after that," said Buckner.

South Carolina's  Department of Natural Resources reports that alligator attacks and sightings are on the rise in the Midlands.  A spokesman says people illegally feeding alligators are mostly to blame.

"It's a very very dangerous thing. Because number one what it does is cause alligators to lose there fear of  human beings. And number two if they start to associate humans with food that's a very simple association that they begin to make," said Steve Bennett with DNR.