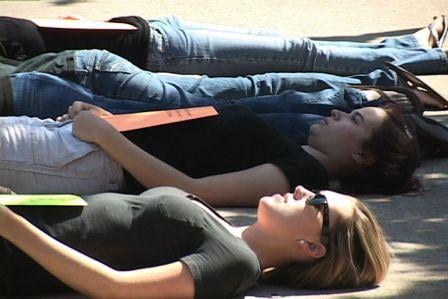 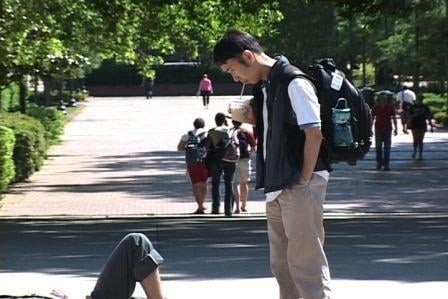 Student looks at protestors lying on the Pickens Street bridge.

Members of USC's Carolina Progressive Alliance silently laid on the Pickens Street pedestrian bridge for 30 minutes Tuesday to represent women who are abused.   The group held the "die-in" to raise awareness of the International Violence Against Women Act.

Protest organizer Sidney Daigle says the number of women who are abused around the world is alarming.

"The act is basically to alleviate violence against women worldwide," said Daigle. "Globally one in three women will be raped, beaten, or otherwise abused in her lifetime."

Passerbys were surprised to see the demonstration in the middle of campus.

A bipartisan bill was introduced in the U.S. Congress in February that would emphasize efforts to prevent violence against women.  It has not come up for a vote.

If it passes, the International Violence Against Women Act would: