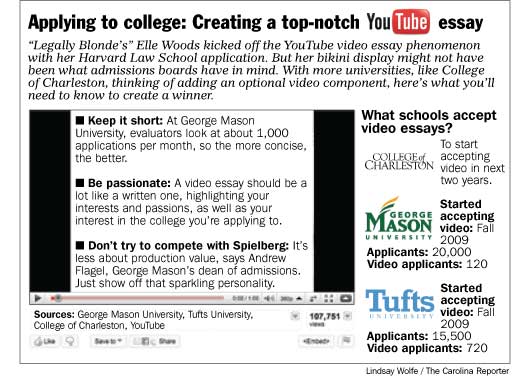 On the heels of George Mason and Tufts universities, South Carolina's College of Charleston might add an optional YouTube video essay to undergraduate applications as early as next year.

"It's a great way for students to be able to express themselves and be creative outside of just typing those letters or sending them in an e-mail to us," said Jimmie Foster Jr., director of freshman admissions at the school.

He said he's committed to trying the program in the next year or two.

But while video essays give a college a more intimate look at an applicant, there's no indicated standard for quality, and a wide range of topics gives applicants freedom to make a diverse range of videos.

"It's less about production value," said Andrew Flagel, dean of admissions at George Mason, which started accepting video essays last fall. "We're not looking for the next Spielberg."

Students have created supplemental video essays for years on tape, CD or DVD, Foster said, but hosting the applications on YouTube lets the admissions committee easily access the videos.

And it doesn't hurt that the YouTube videos are public and often go viral, said Kevin Holmes, who started a YouTube program as the undergraduate recruitment director at George Mason last year.

"You have people who have not stepped foot on your campus yet who are saying great things about your university," said Holmes, now the admissions director at Virginia's Norfolk State University. "Those students are also promoting your university."

A YouTube application for Tufts University, in which Amelia Downs showcases a series of math-inspired dances, has been seen over 100,000 times since it was posted in September 2009.

South Carolina universities like Clemson and Furman already use YouTube for promotion, but not for student essays.

Christine Prado, who creates the admissions materials for Clemson University, says her school has had some success with YouTube promotions, but isn't considering adding videos to its applications.

"Admissions is overwhelmed," Prado said. "To add another piece of something for them to have to review — it would be fun, but I don't think it would necessarily impact the decision of whether they would be a good candidate or not."

"It's a great idea for small, selective institutions that include interviews," Scrivens said. Not so much for institutions like USC and Clemson. Clemson also took in about 17,000 applications for the upcoming school year. Clemson has upward of 15,000 undergraduate students, and USC has nearly 20,000.

If USC were to implement a YouTube video essay, it would be for the honors college and its approximately 1,700 applicants a year, Scrivens said.

Irmo High School senior Vanessa Lindower isn't sure she would need a video after she filled out the Honors College application.

"If they couldn't tell what kind of person I was by all of the questions and essay questions, then they must not be reading all of it," she said.

Lindower, who also applied to Clemson, Winthrop and Georgia Tech, said she fears video essays could make it easier to base admission on appearance and race.

"I would be skeptical about what exactly they would be looking for and on what criteria I would be judged," she said.

That's a concern  keeping some schools from considering the video option.

For instance, Matt Dull, senior associate director of admissions at Appalachian State University in North Carolina, says he hasn't considered YouTube essays until there is a standardized way to evaluate them.

But then there are students like James Kennedy, a senior at Northwest School of the Arts in Charlotte, who think a video essay would be a big help.

"They would have been able to see more of the whole person, not just what I can type out in 250 words," said Kennedy, who's hoping to go to Emerson College to study stage direction.