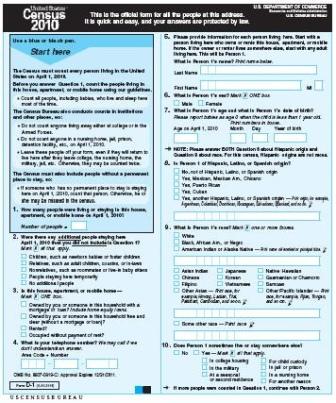 The Census Bureau is asking residents to mail back their forms by Friday to avoid being visited by a Census worker to collect the information.

South Carolina is one of two states leading the country in return rates on the 2010 Census form, a dramatic turn around from having one of the lowest response rates in the 2000 Census.

Sixty-eight percent of people in South Carolina who received census forms have already turned them in, compared to 65 percent last time in the 2000 Census.

Brian Rivers, a USC student, says the ads are what influenced him to fill out the form.

"It was pretty much all those advertisements telling how filling out the census betters your community and just making sure that you're counted," said Rivers.

Lexington County Office Manger Earl Sasser agrees. He says people are mailing it back because they see and hear ads daily.

"We are receiving a lot of publicity in South Carolina because we were so low last time and I think the people are also sending it back because of the importance that it means to South Carolina."

The Census Bureau says South Carolina is spending $1 million to publicize the Census through billboards and events.

The Census will determine how more than $400 billion in federal aid will divide. The numbers are also used to allocate seats in the House of Representatives. South Carolina is likely to have a seventh seat in the House next year.

The Census Bureau is asking residents to mail back their forms by Friday to avoid being visited by a Census worker to collect the information.