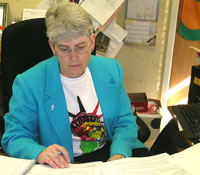 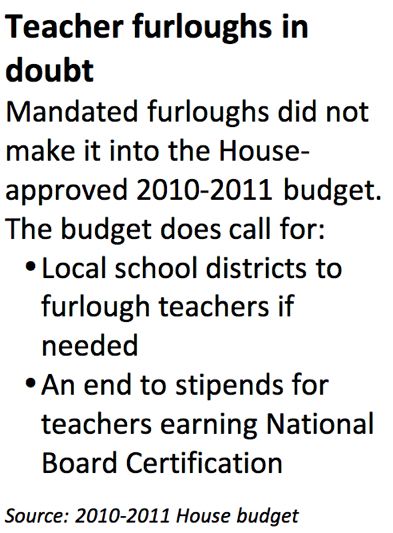 South Carolina teachers still could be furloughed as state and local governments struggle to deal with the recession's aftermath, though now those furloughs won't be state mandated.

The House, which had to close a $563 million gap in the budget that begins July 1, had considered mandated furloughs as a way to save about $100 million. But it took the language out before sending the spending plan to the Senate.

However, the House left in the language that would let local school districts impose furloughs.

So far, Hawaii, Georgia and North Carolina have been the only states to mandate teacher furloughs, said Mike Petko of the National Education Association, which represents teachers.

But the potential of furloughs that remains still has some teachers concerned.

Melinda Hall, the curriculum resource teacher at Mauldin High School in Greenville, said she's already started to save money as part of her backup plan. She said she has had to do this even though she makes more than $47,602, the average salary for a state teacher.

"I won't get an entire paycheck if I'm furloughed," said Hall, who helps classroom teachers improve their instructional methods. "I don't make that much as it is, so losing an entire paycheck would kill me if I didn't have anything saved up."

The House-approved budget cuts $104 million from K-12 education funding. Hall said legislators are making a mistake by cutting education across the board. Instead, she said they should target specific areas where money could be saved.

"We are one of the few states that pay for advanced placement testing, and each test costs about $70. That's a lot of money that could be saved," Hall said.

Over 26,000 advanced placement exams were taken in 2009, and South Carolina pays $54 per exam for low-income students and $74 for others, according to the College Board Web site.

But then again, Hall said, "If I could be furloughed to save one teacher's job, then I am all for it." 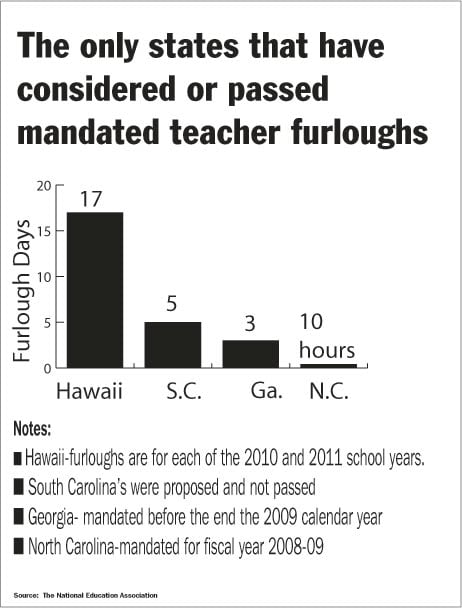 Rep. Anton Gunn, D-Richland, was one of 51 representatives who voted against the spending plan. Gun said on his re-election campaign blog that the budget minus the mandatory furloughs was a slight improvement over the House Ways and Means Committee's original version. But he said he voted against it because of the deep cuts to education and other agencies.

Shelia Gallagher, president of the National Education Association's South Carolina affiliate, said furloughs would not lessen teachers' workload because the school year will not be shortened even though there will be fewer teacher-only workdays.

"They are just going to have to do the same work for less money" and will just have to take their work home with them, Gallagher said.

She said lawmakers have underestimated the impact on students. They say furloughs won't hurt students, but they just don't understand the interworking of a classroom," Gallagher said.

University of South Carolina education major Brooke Steinbaum is graduating in May and looking for an in-state teaching job. But Steinbaum says school districts have told her they aren't hiring because they could have to furlough or fire current teachers.

"It's making it almost impossible for me to find a job," Steinbaum said. "School districts are furloughing the teachers they do have, so why would they hire new ones?"