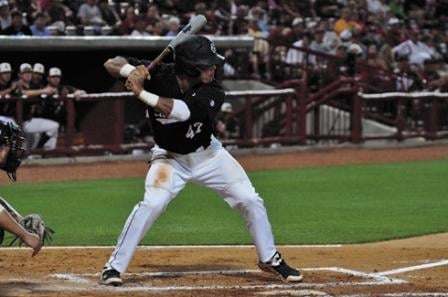 First baseman Nick Ebert's bat lead the Gamecocks to a win over the College of Charleston.

South Carolina improved its record against College of Charleston to 42-5 on Wednesday night.  The Gamecocks beat the Cougars 6-3 with first baseman Nick Ebert leading the offense.  Ebert came into the game hitting .242 for the year and the senior went 2-for-3 with three RBI ‘s and two runs scored.

"I knew they could hit. I played with a bunch of these guys over the summer," Holmes said. "I just went out there and did what I could to help the team win."

Holmes got into a bind in the first inning allowing the first two batters to get on base but struck he out the next three batters to close our the inning.

Head Coach Ray Tanner went to his bullpen in the sixth when Charleston's Cole Rakar hit a solo home run and the next two batters reach base on a walk and a single.

College of Charleston was able to put two more runs on the scoreboard but that's as close as they could come.