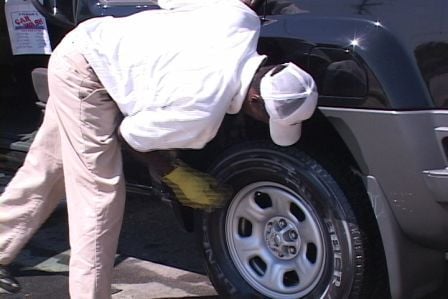 A Frank's Car Wash employee puts the finishing touches on a pollen-free car.

Pine tree pollen is everywhere, covering cars and trees and porches in South Carolina's Midlands this time of year.  Most people curse the yellow-green mess but the people at Frank's Car Wash in Columbia aren't unhappy to see it.

"It's pretty rough around here. We do a pretty good job of cleaning it off," says Morris Lowman.

This is one of the busiest times of the year for the car wash. Frank's usually see about 150 cars a day, but during pollen season that number jumps to nearly 175.

"We check all of our locations quite frequently to make sure everything is up to snuff, and out with the yellow, you know," Jones says.

"Pollen season isn't a death threat to the car wash business. We love to see it because it enables us to see our customers more often," Jones says.

Typically people need to wash their cars every couple of weeks, but during pollen season, Jones says you should get your car washed once every few days.

The pollen won't damage the paint, but a quick wash will make it look better.

This year's pine tree pollen season is expected to last about another two weeks.  So until then, Frank's expects to see more of its loyal customers.