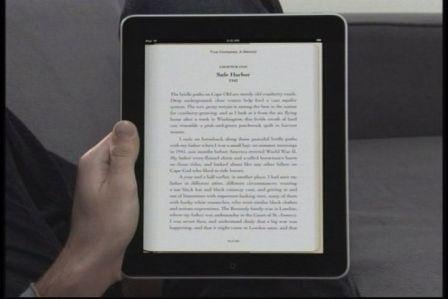 Users can download books to read on the iPad

Apple says it sold over 300,000 new iPads in the United States Saturday, the first day it was available.  Apple also announced iPad users downloaded over one million apps and over 250,000 ebooks from its web sites during the first day.

The iPad lets users browse the web, read and send email, watch HD videos, listen to music, play games, and read ebooks for a price lower than that of a laptop computer.

It has been criticized for not having a keyboard, only being able to run one program at a time, not running Flash programs, having no connections for a TV monitor and no USB port, and for not working well with wide screen movies.

Steve Jobs, Apple's CEO was still excited about the release.

"iPad connects users with their apps and content in a far more intimate and fun way than ever before," said Jobs.

Apple retail stores are offering a free setup service to every customer who buys an iPad at the store, helping them customize their new iPad by setting up their email and loading their favorite apps.