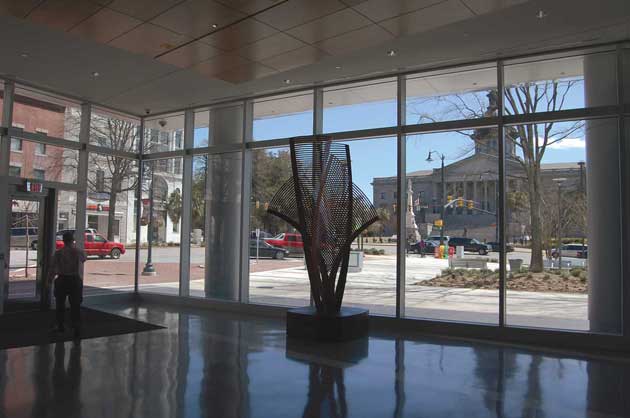 The Army Navy Store on Main Street has been in business for over 28 years. Owner Andy Zalkin said he doesn't know now much more of a bad economy he can take.

Since opening last July, The White Mule has grown financially every month. Owner Dave Britt said his business serves an underrepresented demographic in the city.

The image downtown business leaders have of Main Street varies markedly. Some see a 24/7 destination that will build on traffic coming from the Vista. Others see a declining area with little hope of rebounding.

Despite an emphasis on Main Street from the City Center Partnership since 2002, older businesses have lost business due to construction and the influx of higher end retail.  Some business people are optimistic; others worry the area will not bounce back.

Jeffery Picow, salesman at the 65-year-old King's Jewelers, says Main Street is improving. "I think people are coming downtown, I really do," he said.

In the 65 years King's Jewelers has been in business, many businesses have come and gone, Picow said.

The Army Navy Store owner Andy Zalkin is not as optimistic about Main Street. The store relocated from its Assembly Street location to 1621 Main St. in 1982 because of redevelopment, and it has weathered nearly 30 years of change on Main Street.

Between the loss of Belk and Macy's in the 1990s and the recent construction, Zalkin has witnessed a decline.

Zalkin applauded the converting of the old Macy's to the Columbia Museum of Art and said that it brings customers into the area that are needed.

"The people they bring happen to have money in their pocket, and they're not scared to spend it," he said.

Gotham Bagel Café opened in January of 2009. Chuck LaMark, one of the café's partners, said they came in at the worst part of the recession.

"For us starting a business during the Great Recession, actually is turning out to be pretty good," he said. LaMark said that starting during the worst part of the recession could be an advantage compared to older businesses in the district because he didn't know any better. LaMark said things couldn't get any worse, and as things improve "it's all gravy to us."

Even with Main Street's problems and the recession, Ike McLeese, the president and CEO of the Greater Columbia Chamber of Commerce, said that Main Street is in an ideal position to turn itself around in the near future.

"We're very fortunate of the fact that we had our hooks into Main Street and pulled it forward over the last 10 years," McLeese said. "If we were trying to do something now, in this recessionary period, minus that all things that have happened in the last 10 years, we would be finding it impossible."

The White Mule Music Pub & Eatery opened in July 2009, and owner Dave Britt says his business has succeeded despite Main Street's problems and the recession.

"I think The White Mule has proven that you can take a business to Main Street and overcome those perceptions and still be vibrant and talked about in the media or in social circles as any other place in Columbia," Britt said. "I think that more businesses need to come take a chance, and if they do, they'll be pleasantly surprised by the amount of reception they get."

"I think we are going to be well-positioned to take advantage of things coming out of the recession, to bring more jobs on to Main Street," Jackson said.

Jackson says that he hopes that the Vista and Main Street will feed into each other – Main Street is only one block away, but Jackson says crossing Assembly Street can seem intimidating.

Despite differing opinions, McLeese, Jackson and Zalkin all envision an ideal Main Street: a combination of retail, residential and office spaces.

One of the biggest hurdles Main Street faces is overcoming a perception that it is dangerous. Storeowners and Jackson says that perception is inaccurate and urge Midlands residents to visit downtown.

Despite the optimistic outlook of Jackson and Britt and the city's expansive plan,  Zalkin doesn't know how much longer his business will last after the current recession and the construction.

"So we're dealing with our second year now of what everyone else is dealing with still their first year," he said.  "I'm not quite sure how much more of this we're going to be able to put up with."