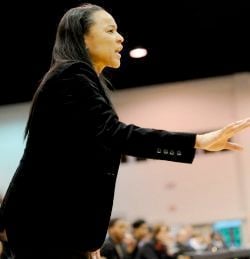 USC women's basketball coach Dawn Staley said it was a blow to the team. She was talking about the decision by SEC All-Freshman center Kelsey Bone's decision to transfer from USC after one season.  Bond, one of the highest-profile recruits in USC team history, gave no reason for the decision.

Staley says she found out about Bone's plans two weeks ago and has since lobbied unsuccessfully with the freshman to stay. Staley said the team has to move on.

"We lost a family member. And sometimes, family members make decisions that we don't all agree with, but we have to support them. And we are supporting Kelsey and her decision to leave us, and we're sad she's doing this," she said.

Bone led the SEC with nine rebounds per game and was in the league's top ten in scoring. Staley said she did not know Bone's plans for next year.