Tornadoes Touch Down in the Midlands - DatelineCarolina

Tornadoes Touch Down in the Midlands 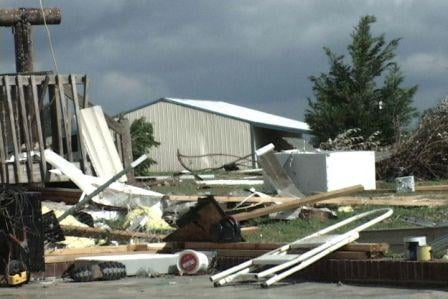 Branches and debris covered much of Stephanie Amick's front yard in Batesburg-Leesville on Monday morning. A bed hangs out of the house frame as neighbors pick up siding strewn across the grass. A refrigerator and treadmill sit in the backyard.

"I felt the wind blowing really hard and I came out and looked around and found that there was debris flying across the field," said Charles Caughman, the Amick's neighbor. "At the time I called my sister and she said that there was a tornado coming across her house. She was on the phone with 911."

The tornadoes that touched down in the Batesburg-Leesville area Sunday night left scenes of debris filled lawns and fallen trees in their path. The two tornadoes, classified as EF2 strength based on the amount of damage they did, hit at 11:30 p.m.

"We rate tornados as wells and it's called the Enhanced Fujitas scale and a EF2 means that the winds here were around 125 miles per hour, so that explains why you see the damages," Leonard Vaughan of the National Weather Service said.

People in the community disagree on whether or not there was a warning. Caughman said he received no warning about the tornado. Amick said the only warning she heard was for a severe wind warning. Others say their weather radios broadcast a warning.

While Stephanie Amick said her whole garage blew away, her family survived with only scratches. Amick's home was filled with members of the community and her church, whom she says were there early the next morning to help.

No serious injuries or deaths were reported.