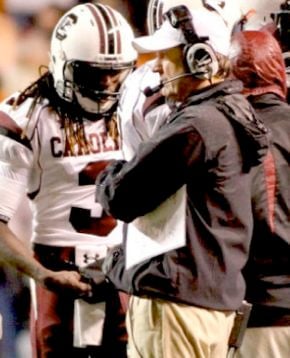 Coach Spurrier is happy with what he sees at the scrimmage

The Gamecock football team took the field at Williams Brice Stadium Saturday for their second scrimmage of this preseason.

Brandise completed five of eight passes for 72 yards and Head coach Steve Spurrier says he was very impressed at their efforts on the field.

"They might be in the run for more than just a backup spot," he said.

On the defensive side the attention focused on cornerback Stephon Gilmore and defensive tackle Melvin Ingram.

The two run the "Gilmore Package" also called the Wildcat, or, here at USC, the "Cockblock" formation.

In the play, Gilmore lines  up as a quarterback and Ingram plays the part of a running back.