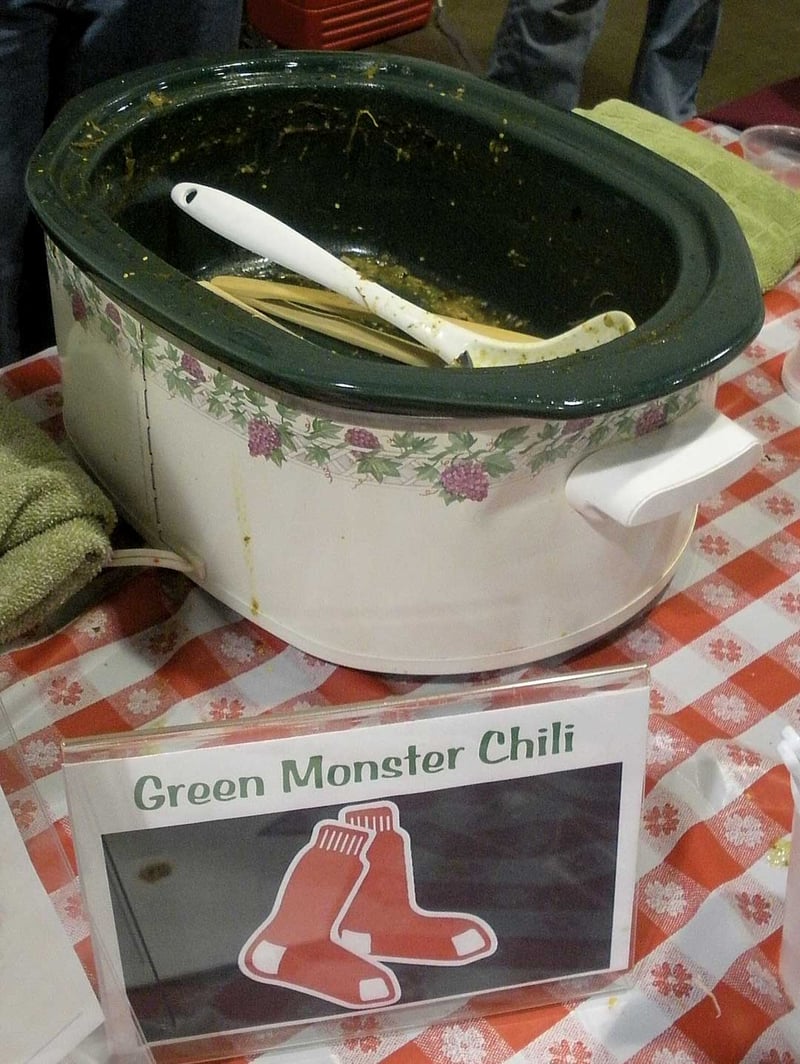 James and Kimberly Keaveny’s “Green Monster Chili” won the crowd favorite trophy, which came as no surprise as the team served all five gallons of the popular recipe before the winners were announced.

By Pete Shooner
Edited by Katie Jones
Posted on March 25, 2010

A great bowl of what Peters calls "that stick-to-your-ribs goodness" is rather rare in Columbia restaurants. But those looking for South Carolina's contribution to the chili culture found it recently at the State Fairgrounds' Ellison Building.

The Palladium Society's 12th annual chili cook-off drew over 30 cooks hoping their pot of chili would be crowned best. Money raised by the event will help restore historic houses in Columbia, one of the society's main functions. Cooks paid a $30 fee to enter their chili, while guests paid $15 to $25 to attend.

Peters, who judged the cook-off last year, said no one recipe defines this American dish.

"Chili is just an idea, and everyone and every region has a different concept of that idea," Peters said.

Florine, who was born in Nebraska, said his cousin who grows bison butchered one four days before the February cook-off and sent the meat to him.

The 33-year-old's original recipe was his second entry. "I wanted to do something different this year, and I figured no one would think to use buffalo," which he said is low in cholesterol and fat and is packed with protein.

"I'll take it over filet mignon every day," he said.

Bert Richardson of Irmo didn't need his meat shipped in. He shot it himself – 5 pounds of South Carolina deer.

Richardson, in his fifth year at the cook-off, added a personal punch to his "Bert's Buck" recipe – 4 ounces of bourbon at the end of cooking.

James and Kimberly Keaveny, who moved from Boston to West Columbia 10 years ago, have been attending the cook-off for three years, but this was the first time they entered.

James Keaveny said he found the "Green Monster Chili" recipe online and has been tweaking it for over five years. He roasted the Boston butt pork for over 24 hours and then added the rest of the ingredients, including tomatillos, or green tomatoes, for the color.

Served with a dollop of guacamole on top, the Keavenys' chili was wholly inspired by Mexican cuisine.

Celebrity judge Mayor Bob Coble, along with a few local chefs, decided the official winners, but the real test was the people's reaction.

Dan and Amy Elswick of Columbia were among the 600 people, by organizers' estimates, who came to eat chili and serve as judges for the coveted "crowd favorite" trophy.

"My favorite was ‘Turduckin,'" said Dan Elswick, who tried 25 recipes. "When you put a different meat in a chili, it's easy to do just that and nothing else. The flavors those guys put in there, they all worked together."

His wife, Amy, a vegetarian, said she liked the "Taco Take Down Chili" the best.  It took third place overall.

The crowd favorite was the Keavenys' "Green Monster Chili," one of the few to run out before the winners were announced.

"Nuclear Meltdown H2" also won the heart healthy category in which entrants must provide a detailed list of ingredients that qualify as healthy by a dietitian.