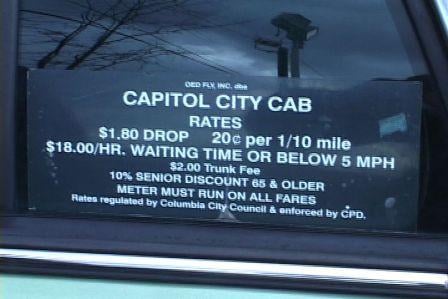 West Columbia's Capitol City Cab company is thriving despite the weak economy and lots of competition.  There are 15 taxi companies in Midlands, Capitol City is the third largest.

Capitol's general manager William Arvay says the company's size is the main reason it's managing to stay in business.

"There's always safety in numbers," Arvay said. "As many drivers as we have, one driver may have a bad day a month, another may have another very, very good day, and they tend to even out over time."

Arvay says the number of people calling Capitol cabs actually increased over the last year. He says Friday night traffic has gone up by more than six percent.

There has been a drop in the number of people calling cabs to get back home after shopping according to driver Paul Houston.  He says its because city buses have stopped running in that area.

"A lot of people would ride from downtown on the bus to go over to the grocery stores and then, you know they'd have too many groceries to carry back on the bus," Houston said. "So we would carry them back."

Drivers of Capitol and other companies are not making as much money per customer as they used to. The city of Columbia controls the rates that they can charge. The rate of a $1.80 to start and 20 cents per mile has not been raised in over five years.