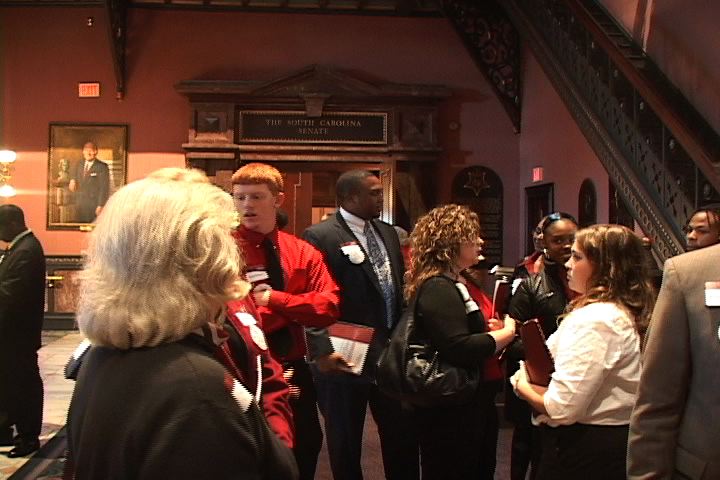 Students, faculty and alumni gathered at the statehouse for Carolina Day on Wednesday

South Carolina lawmakers are considering a round of budget cuts for higher education that would trim another $26 million dollars next year.  Last year the legislature cut almost that much but federal stimulus money offset that loss.

The one-time stimulus money runs out at the end of the year and the University of South Carolina is struggling to make up for the losses in state funds.

"Legislators are just in a tough position right now because there is just no money," said Casey Martin, USC's Legislative Liaison.

And with stimulus dollars running out, lawmakers say there is no money left for higher education.

"We were on life support, but somebody has unplugged us," said Spartanburg Rep. Harold Mitchell.

Hundreds of faculty, students and alumni gathered Wednesday at the Statehouse in Columbia for the annual Carolina Day at the Capital.  USC junior Anna Hecksher joined hundreds of other students to make sure lawmakers know USC needs money now.

"If we don't have enough money to continue these programs that students are interested in… they are denying students from entering the field they want and the career they want," said Hecksher.

Studies show South Carolina is next to last when it comes to receiving state funding compared to 16 other southeastern states.

University officials say students may see an increase in tuition and class size.

"We anticipate there will be very moderate tuition increases, but there is no way to get through that without tightening our belts," said Martin.

But some legislators say tuition needs to be affordable, especially in this tough economy.

"Education will be the key to turning this recession around," said Rep. Mike Anthony.

"We have got to invest in higher education," said Rep. Harold Mitchell.

But why all the cuts?

Anna says that's why she came to the event to push for action to get money for her and others educations.

"It is important for me for us to get money so people after I graduate can continue to have a great education like I have," said Anna.

But with no money in the budget USC will have to make some tough decisions to deal with the proposed cuts. Students like Anna will have to pay the costs.