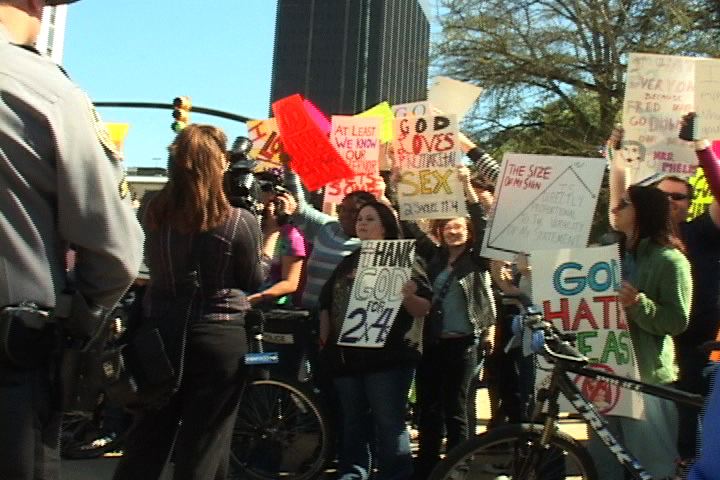 Protestors against Westboro Baptist members hold up their signs

The South Carolina Special Olympics held a rally yesterday on the statehouse steps, publicizing a drive to get the word "retarded" removed from common use.  But they were overshadowed by another group.

Members of the Westboro Baptist Church from Topeka, Kansas, came to Columbia to promote their beliefs. They are notorious for protesting against soldier's funerals and homosexuality.

"We're here because of this filthy state and their pretense of religion.  They justify sodomy.  They make Sodom and Gomorra look righteous, these evil people in this evil state.  That's why we're here," said church member Jonathan Phelps.

Members of the church held signs that said everything from "God Hates America" to "Divorce plus remarriage equals adultery".

But the church members met some opposition from other people there to protest against them.  The University of South Carolina's Pastafarian club came to speak out against the Church's message of hate.

"I'm here to protest bigotry and intolerance, which I believe is fostered by fundamentalist religion," said Andrew Cederdahl the President of the Pastafarian club.

And many people felt the same as Cederdahl.

But many people saw the protest as a distraction from the positive message the Special Olympics had.

"At one point, we were trying to pay attention to the Special Olympics groups and a chant started that said ‘Stop your hate. Stop your hate' and it was drowning out the voices of the speakers, and it was a real shame, I thought because there was so much good that could come from this and so much hate over there," said Jonathan Anderson, who came to watch the Special Olympics rally.

Despite the tension between the groups, both sides were able to protest in a peacefully, watched over by state troopers and police.