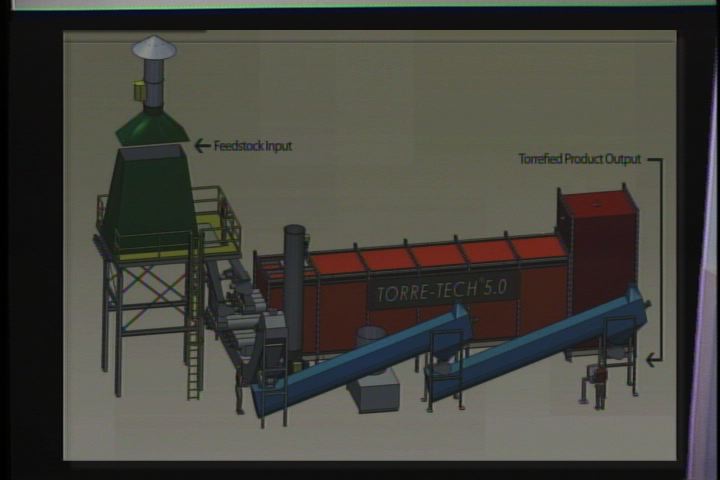 The Torre-Tech 5.0 will be the first of its kind in the world

A Columbia entrepreneur is working on a project to produce a fuel he hopes will eventually replace coal as a power source.

Joseph James is the president of Agri-Tech Producers, a small company he operates out of his house in Northeast Columbia. Agri-Tech holds the license for a process that converts biomass products, such as wood or switch grass, into an end-product that has properties similar to coal.

The process, called torrefaction, was developed by North Carolina State University. Agri-Tech bought the rights to the process when the company was formed in 2005.

"What we want to do is toast (the biomass) at a relatively high temperature," James explained. "Above the temperature that it would normally burn. But by removing the oxygen, we prevent the burning from happening."

The end-product is a coal substitute that has almost as much potential energy as fossil fuels, but creates much less pollution. The process has attracted the attention of power utilities nationwide.

"Our process is carbon neutral," James said. "We actually make a fuel that does not increase the net amount of carbon in the atmosphere."

Agri-Tech is partnered with a Spartanburg textile equipment maker, Kusters Zima, to create the world's first commercial torrefaction machine.  Kusters CEO Ken Kruse said production of the Torre-Tech 5.0 will begin in May.

"So many of them, especially the coal-fired facilities, know that there is a limited amount of coal left in the world to create energy," Kruse said.

He now hopes a new partnership will help market the alternative fuels globally.

Agri-Tech announced a relationship Wednesday with New Hampshire-based Cate Street Capitol, an investment group that will fund the Torre-Tech project. Cate Street will also arrange for companies to conduct their own tests of the process.

Biomass can be almost any type of wood or plant matter, making it a renewable resource James believes is readily available.

James adds that, environmental concerns aside, torrefaction would be good economically for South Carolina.

"South Carolina does not produce a single bit of coal and it produces no oil," James said. "So we are exporting money outside of our state to pay to bring those resources in. Wouldn't it be better for our state  economy... to make our own fuel to the extent that we can?"

Kruse said the first Torre-Tech 5.0 will be finished and ready for testing by early August.