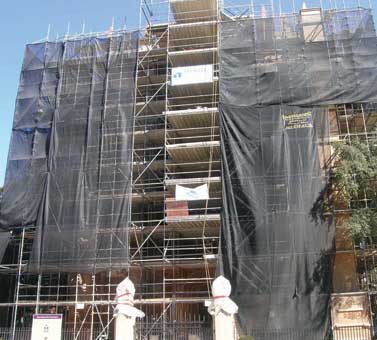 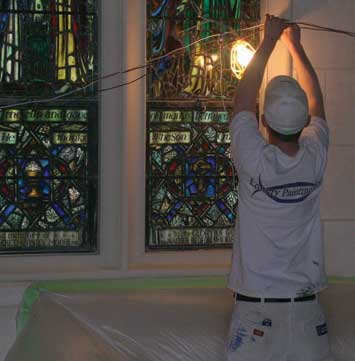 A construction worker at Trinity Episcopal Cathedral works to adjust the portable lighting. Over $7.1 million has been raised to fund the three-year restoration project, though more needs to be raised.

The congregation of Columbia's historic Trinity Episcopal Cathedral plans to return to its renovated cathedral this September.

South Carolina Episcopalians attended services inside the Sumter Street church for 160 years, until a $7.1 million restoration project forced the congregation into its Mission and Ministry Center three years ago.

But the church's Feb. 14 newsletter said Trinity's historic cathedral should be fully restored and ready for services this fall.

The project has progressed to where a mid-September opening looks likely, project manager Wilson Farrell says.

"We don't expect to find anything substantial enough to delay us any longer," Farrell said. "We've tried as best we can to take care of the unknowns."

Cantey Heath, a member of Trinity for 46 years, says that while attending services away from the cathedral has not been ideal, the restoration has not hurt his churchgoing experience.

"It was a little unusual at first, but they did such a good job of laying out the worship space as the cathedral itself, it was hard to tell the difference after a while," Heath said.

Heath says that even though there hasn't been a sanctuary for three years, he hasn't noticed a drop in church attendance.

"Once you get use to it, the experience is pretty much the same. It's just not as pretty," he said.

Farrell says the restoration began as a project to replace the heating and air conditioning systems, but then severe structural problems were discovered in the 5,500- square- foot cathedral.

"The floor had sagged, and there were indications that the structure had actually moved," Farrell said.

"Once you uncover it, you can't just walk off and leave it," he said.

The Trinity Foundation, established separately to raise and maintain funds not in Trinity's general operating budget, detailed the extensive construction needed in a May 2007 letter to the parish:

—Replace the front steps and rebuild the handicapped ramp.

In order to finance these projects, The letter said the foundation and the cathedral's general operating budget would commit $750,000 over five years, but the rest of the money would have to come from donations.

The foundation said last March that over $5 million had been raised. But because the cathedral is so old, over $2 million more was needed to complete the project, said Mary Belser, chairwoman of the restoration campaign.

Belser says Trinity has raised that $2 million, but that even more money may be needed, though a specific cost hasn't been determined.

"The fact that we have met this challenge has thrilled my heart because it shows how special Trinity really is," Belser said.

Despite the economic downturn during the bulk of the fundraising, Belser says the congregation just kept giving.

"Some people have given their Social Security checks, while others have given their federal and state tax returns," Belser said. "There have been a few large donations, but the large number of small gifts has showed the broad commitment of the church."