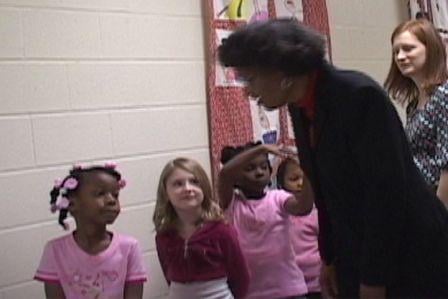 Dr. Shirley Watson has been a principal at Condor Elementary for 20 years.

Dr. Shirley Watson is the Condor Arts Elementary principal, and is now she has been named the nation's Magnet Schools of America "Principal of the Year."

The announcement came as a surprise to Watson.

"Oh my gosh! They had cameras, they had all the students, everybody had assembled in the cafeteria.  And when I walked in they presented me with flowers and a big congratulations," said Watson.

The award is given by the Magnet Schools of America organization to leaders of schools with outstanding programs that address student achievement and diversity.

Condor Elementary students rotate through classes in everything from music, dance, and strings to  African drumming throughout the day.

"She's very deserving, she does great things for our school," said Wiley.

"We are so excited because through her leadership, Condor has become a star in the community.  And so this award is just to validate something we already know," said Assistant Principal Alvera Butler.

Watson appreciates the award, but she doesn't take all of the credit.

"I also felt like it was time to say thank you to all of the dedicated staff I have here," said Watson.

The "Principal of the Year" national award will be presented in May at the National Association of Elementary Principals conference in Tampa, Florida.

But by the looks on the faces of Condor Elementary students, Watson is already a winner.

This is the second year a principal in Richland County 2 School District has been selected as a magnet school's "Principal of the Year."