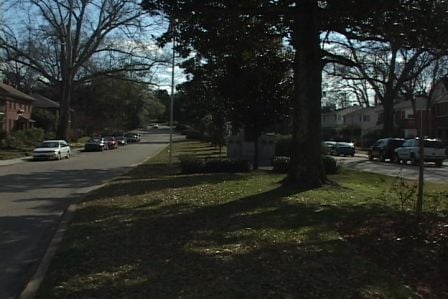 Katie was robbed on Saluda Ave. less than two blocks from Five Points.

"College students always think that they are invincible but I know that's not true because I had a gun put up to my head," said Katie Simpson.

USC students Paul Bowers and Katie Simpson were both separately robbed at gunpoint around the USC-Five Points area early that Saturday morning.

"One of the guys took out some kind of revolver and put it to my chest," said Paul Bowers.

Katie was walking home with a friend on Saluda Avenue at about 2:00 AM.  Katie says they saw a man standing about a block away from them, and something didn't feel right.  They crossed the street to a grassy median, where Katie says two additional men popped out of the bushes.  She says one man put a gun to her head, asking her for, "all her stuff."  She gave the man everything she had.  Katie and her friend were able to get away safely. They ran to Five Points and called police.

About a half hour earlier, and only blocks away, three men with similar descriptions robbed Paul and his friend Matt Wolfer in USC's Moore Garden on Blossom Street. They were sleeping in a Gazebo in the park as part of their plan to experience homelessness.  They  had no cell-phones, cash or any valuables.  Paul says the robbers weren't too happy to find them empty handed.

Both Katie and Paul described the robbers as three black men in their young 20's.  They say all three men were dressed in dark, baggy clothing and had head coverings of either hoods or bandanas.

Katie says Columbia police arrived within a minute and she was impressed with how the officers handled the situation.

Two violent crimes in one night in the USC area may seem unlikely, although South Carolina saw over 6,500 robberies in 2008.

Officer M. H. Mahon, of the Columbia Police Department, says the best defense against crime is to avoid the problem all together.

"Avoid not well traveled, well lit-areas wherever you go... make brief casual eye-contact with people as you pass them... trust your instincts... there is a degree of safety in numbers," said Mahon.

Mahon admits that crime can still find you even if you do these things right.  Katie and Paul had followed the tips.  Mahon suggests you consider what you would do in different crime situations.

Paul says he plans to continue his homelessness project over spring break.  But he says he'll be more careful, and stay in shelters instead of on the streets.

Katie says she takes her safety much more seriously now.

"I'll never walk anywhere by myself, even to another bar. I have had security officers walk with me, I will lock my doors more often.  I will always lock the house now," said Katie.

There have been no arrests made in relation to either robbery.  Katie says she has met with a detective.

In the meantime, Katie is speaking to groups around campus about personal safety, hoping she can keep what happened to her, from happening to anyone else.