Is There a Future for Gymnastics at USC? - DatelineCarolina

Is There a Future for Gymnastics at USC? 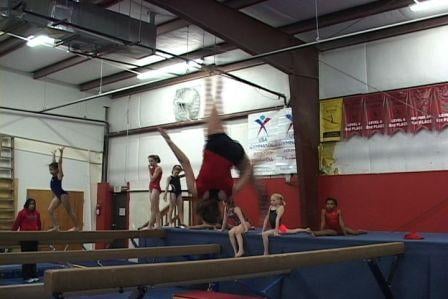 Victoria Hilliard is a top-level gymnast at the Carolina Gymnastics Center in Columbia.  She has been doing gymnastics for 14 years and hopes to compete in college after she graduates from Lexington High School next year.

"I'd love to do college gymnastics.  It'd be like a great opportunity.  But there aren't really any in state schools with gymnastics," said Hilliard.

The University of South Carolina created a gymnastics team in 1976 to join seven other SEC schools that field teams.  The program was cut five years later.

Joanne Child is co-owner of Carolina Gymnastics Center and she thinks an in-state program would be beneficial.

"I just think if we had a program in the state it would really be an asset to both the community and the university," said Child.

Child is not alone.  Other coaches and gymnasts in South Carolina feel the same way.

Anna Sexton is the women's head coach the Gymnastics Center.  She is also the director at one of the largest gymnastics camps in the nation, Woodward Gymnastics.  Sexton has trained several national champions, including former South Carolina state champion, Karli Jones, who competes for the University of North Carolina at Chapel Hill.

"As passionate as we are between Clemson and Carolina, if one of those universities, hoping USC before Clemson always, were to get it then I think it would be very well received throughout the entire state," said Sexton.

USC Associate Athletics Director Marcy Girton says she did not know why the gymnastics program was cut.  Girton said USC does not have plans to add another sport.

"There was a study done a few years ago that evaluated options of sports to add in the event that the University of South Carolina chose to add a woman's sport.  And at that time lacrosse was selected as the possible sport to add for the future,"  Girton said.

Sexton believes a gymnastics program at USC would only enhance the athletic department.

"The University of South Carolina is already so well-rounded in the SEC with other sports in track and football that I think people would come to the Carolinas," said Sexton.

Symone Bennett is also a gymnast at CGC who hopes to compete in college like her teammate Victoria.  Bennett thinks that a collegiate gymnastics program in the state would draw a huge crowd.

There may be no plans for collegiate gymnastics at USC, but Victoria will not let that stop her quest to compete in college.