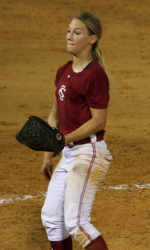 Junior April Borchardt in the outfield. She had a pair of 2-hit days against the 49er Tuesday.

The Gamecocks started the scoring in the third, loading the bases with no one out. But Charlotte's Emily Jeffery was just too hot to handle, she fought back getting 2 strikeouts. Jeffery had a career high of 17 strikeouts in the game.

Gamecock juniors April Borchardt and Laura Mendes had a pair of two-hit days but that just wasn't enough. The Gamecocks lost the game 8-1.

South Carolina's overall record dropped to 6-4 while they're 4-1 at home. Their game Wednesday against Campbell was postponed because of rain and will be played later in the season. The Gamecock's next game is on the road this Saturday against Providence.