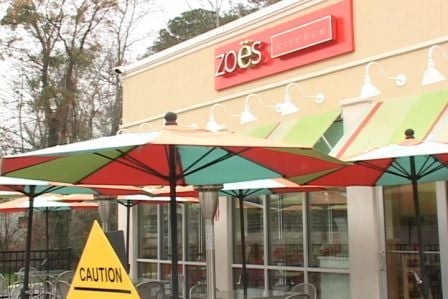 Zoe's Kitchen on Forest Drive was robbed twice over the holidays.

Business owners in Forest Acres are taking precautions to protect their businesses after three unsolved robberies over the holidays.

This wasn't the last time.

The robbers jumped the fence and waited for employees to take out the trash.

"Naturally any place can be robbed, but when you're robbed twice in a short period of time it's grounds to be concerned," said Forest Acres Police Lieutenant B.W. Hinson.

And Zoe's owner Will Gallespie is concerned because he thought the area was safe.

"I've tried to talk to any other restaurant owners I know just so they know how easily it can happen," said Gallespie.

Lieutenant Hinson says the most important thing to do now is take security measures to protect the store and employees from another robbery.

Zoe's Kitchen has installed surveillance cameras since the incident, and they keep the back doors locked at all times.

The Forest Acres Police Department and SLED are continuing their investigation of the robberies.

For more information on how to protect your Forest Acres home or business, visit the Forest Acre's community website.