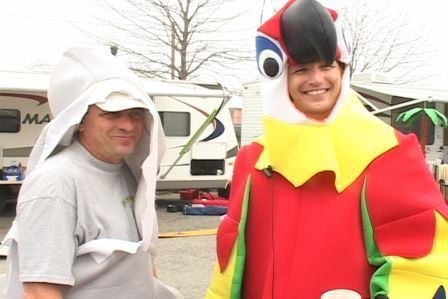 Outside of the Colonial Life Arena the "Parrotheads" or Buffett fans had a good time.

Jimmy Buffett fans made themselves at home in the parking lots surrounding the Colonial Life Arena.

Many fans arrived early in the morning, some as early as 6:30 AM.

Excitement was in the air as the colorful fans geared up for Buffett's Summerzcool concert tour.

The concert fell at midweek, but that didn't stop these people from having a good time.

Neil Hawkins was one of the many who took the day off from work.

"It's like a big family reunion, folks you don't know you feel like you know them by the end of the night," he said.

Buffett fans have a reputation for being rowdy, but Colonial Life Arena officials aren't concerned.

"It's more or less just a bunch of people having a good time and enjoying the show," said Colonial Life Arena Assistant Director Brian Hixenbaugh.

The concert sold out.

It was the first time Buffett came to Columbia since 2005.