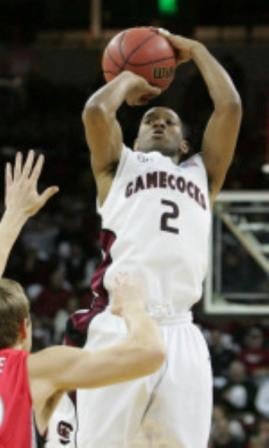 Devan Downey led the Gamecocks with 16 points against Tennessee

Brandis Raley-Ross had 16 points to lead the Gamecocks, who have lost four of six since their upset of then-No. 1 Kentucky last month. Bobby Maze led the Vols with 14 points. Wayne Chism had 11 points.

USC's Devan Downey, the SEC's leading scorer, shot just 4 of 18 from the field for 15 points, his lowest output in a conference game this season.

Tennessee's defense prevented any hope of a comeback. The Vols held South Carolina to just 1-of-12 shooting from behind the 3-point arc.

Tennessee made had two field goals over the final seven minutes of the half and trailed 28-24, the fourth straight game it was behind at halftime.